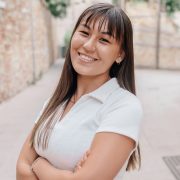 This month I've spent in Urbino has by far been…

Francesco Bramucci, owner of Nidoramo, showcases one of their best-selling products; a van with a detachable lid.

A woodworker in his element, in his workshop surrounded by his tools and projects.

Bramucci works with a lathe, a woodworking tool that spins a piece of wood as he carves it.

Bramucci uses a special type of American wood to build his toys because it is darker than Italian wood.

A Nidoramo flower-presser is displayed at local bookstore Libraccio di Miki, one of Nidoramo's business partners.

Francesco and Anna Bramucci–toy artists whose medium is wood

URBINO, Italy — Woodworker and toymaker Francesco Bramucci’s home and workshop sit on a hill in the countryside of Urbino, overlooking rolling green hills dotted with houses and patches of trees. His home is “guarded” by a golden poodle named Pascal who charges out the front door at the sound of a car pulling up on the gravel drive. Curly fur covering one of his eyes, he approaches holding something in his mouth—not a toy, but a rock.

Inside, wooden toys and structures clutter every room of the house. A couple of rooms in the house act as storage for past projects, parts of toys, and a shelf lined with cans of paint. Bramucci jokes, “Everything in this house that’s made of wood is broken.”

Bramucci and his wife, Anna, are the owners of Nidoramo. With an artistic and caring eye, each wooden toy and game they make is a uniquely crafted piece of art, from a San Francisco cable car to a miniature climbing wall.

Attached to the side of the house is Bramucci’s laboratorio, where he does his woodworking and building. Inside, shelves are lined with various toy parts, tools hang on the walls, multiple workbenches support different types of machinery, and slabs of wood are stacked in a corner. Bramucci says, “The mind is always here”—he’s always thinking about his work. It’s important to concentrate while he’s working, he says, because the tools he uses are dangerous. “Even one mistake is too much,” he says. He stays concentrated by listening to music or audiobooks as he works.

To demonstrate how to build a spinning top, Bramucci grabs a small cylindrical piece of wood and secures it into a lathe, a tool that rotates a piece of wood so it can be cut on all sides. As the wood turns, he holds a metal carving tool to its surface. Using no templates or measurements, the piece of wood begins to take shape. Bramucci used to specialize in creating spinning tops. “Do you like blue?” he asks, and grabs a blue paint marker, drawing a line around the spinning top, slowly hand rotating the lathe to get the perfect line. “Do you like red?” he asks, repeating the same process. He mentions that spinning tops are not sold through Nidoramo, since they are very small toys, and the business is trying to focus on building bigger items, but he seemed to take joy in creating something so familiar.

Francesco Bramucci and his wife, Anna, are the owners of Nidoramo. With an artistic and caring eye, each wooden toy and game they make is a uniquely crafted piece of art, from a San Francisco cable car to a miniature climbing wall.

Bramucci and his wife run Nidoramo together; she is the “mind,” and designs and paints the toys while he does the woodworking and building. Their relationship even started with a game: The couple met during a soccer match; the ball was kicked out of bounds and into the woods. They both went to retrieve the ball, and there they met. Together, they have two children–their “toy-testers”—who are 6 and 3 years old, with another on the way.

Bramucci originally studied philosophy in college and wrote his thesis on French author Simone Weil’s work, but decided his true passion was woodworking and building. He says that he originally got his start by helping a friend build a wooden chess set with a lathe, which is one of the first power tools he learned to use. He says that to this day, he “never finished the project.”

For about ten years prior to starting the business two years ago, the Bramuccis traveled all over Italy and showcased their products, which helped to build up their name and popularity. The toys are made so that children can be independent and learn on their own while still being safe. The word “Nidoramo” is a combination of two words: “nido” meaning “nest,” and “ramo” meaning “branch.” The nest is a representation of how they help children develop and grow, because the nest is where birds learn to fly. The branch is to represent the fact that the toys are made of wood.

While the majority of the toys he creates are customer requests, there are a few that stay in stock because of high demand. Some of his best-selling toys include a van with a removable roof, a Jeep with a ladder on top, and a treehouse.

Most customers find Nidoramo through their Instagram page, though a few stores carry their products. The owner of Urbino bookstore Montefeltro Libri, Catia Bertuccioli, has been a business partner of Nidoramo for four years, since before the COVID-19 pandemic. Bertuccioli loves Nidoramo’s products, describing them as “beautiful” and “high-quality.” Sara Maria Dorsi, owner of bookstore Libraccio di Miki, also carries Nidoramo’s toys. She says that the two businesses have a “very good” relationship with each other, and that “it is a pleasure to work with them.” Dorsi adds, “The idea of the shop is to create connections, and to help small businesses… it is not a question of money, but to help each other.”

Translation of interviews and other language assistance by University of Urbino students Lorenza Abbondanza, Sara Gabellini, and Maria Silvia Pieri.

This month I've spent in Urbino has by far been the fastest month of my life. This trip has been jam-packed with learning photography, videography, and reporting, as well as exploration and adventuring throughout the country of Italy. Every day as I'd walk around campus, pass by the Duomo, the Ducal Palace, and the artist Raphael's home, I'd think to myself, "Wow, people really get to go to school here and see this every day,", but then I'd realize, I am one of those lucky people! Each day I spent here I learned something new, inside the classroom, and especially outside the classroom. I had the opportunity to take weekend trips to Venice and Sirolo, both of which are beautiful places. But funny enough, I always found myself missing Urbino. One of the most important things I've learned here is that experience is always the best teacher. The hands-on approach to learning has helped me leave my comfort zone and gain confidence in my abilities using different types of media. I am very fortunate to have had the opportunity to be a student here in Urbino, have the help of amazing translators, and to work amongst media professionals whose advice will stick with me throughout my career. Thanks for everything Urbino, I hope to be back one day!