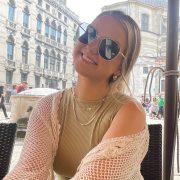 When I first came across this program, little did I…

Giancarlo Gobbi, an actor-turned-photographer, has opened a gallery and studio at the top of Urbino's Via Raffaello.

Gobbi shows off the work of Christian Basetti, whose images of abandoned villas are among the first to be exhibited at the gallery.

As a child, Basetti admired adventure movies like the Indiana Jones series, inspiring him to photograph stunning abandoned villas all across Italy.

Gobbi's gallery has joined a community of shops at the top of Via Raffaello. Giorgio Duranti, frame shop owner and painter, stops by the neighboring wine shop several times a day for a smoke and a chat.

Wine shop owner Luca Rusciadelli explains how the presence of the Gobbi Photo Studio has increased tourism at the top of Via Raffaello.

Luca Rusciadelli (right) and Giorgio Duranti gesture toward the statue of Raffaello that stands only feet behind them.

Basetti's exhibit, called Va, Pensiero, takes its name from a Verdi opera and means "fly, my thoughts." Basetti says of his project, “I am an anachronistic presence inside these forgotten places, where in some cases the uncontrolled nature takes back the place once stolen by mankind.”

A photographer has big plans for art in the city

URBINO, Italy—Giancarlo Gobbi, photographer and owner of Gobbi Photo Studio, walks to his gallery at the very top of Via Raffaello, the statue of Raffaello only a few hundred feet behind him. He reaches in his pocket for the key to open his newly renovated, modern space, a sharp contrast to the older shops nearby.

Gobbi is an experienced photographer with big names on his resume. He has worked all over Italy, including Milan and Rome, as well as in New York City and other American locations. Currently, he is based out of Urbino. He has a big vision for Urbino and the rich artistic culture already prevalent here.

Born and raised in Rome, Gobbi started his career as a young actor, which took him to New York in 1995. “I was on the phone with my friend describing how beautiful the city was and that I had to show him all that I saw, so I went out and bought my first camera,” says Gobbi. And the rest is history.

As his career continued, Gobbi continued acting but also started pursuing his love of photography. For about eight years, he was both an actor and photographer until ultimately deciding to continue only his photography career.

Photographing big events in Italian culture, such as the Olympics and film festivals, became a normal part of Gobbi’s job. Images of Steven Spielberg and the Italian Olympic volleyball team hang on his gallery wall, marking iconic moments in his career.

Situated on top of Via Raffaello only feet away from the iconic statue of Raffaello, a symbol of traditional art in Urbino, Giancarlo Gobbi is opening Urbino’s eyes to a new art form–photography.

On a recent June morning, Gobbi opened his studio for visitors to observe the work of Milanese photographer Christian Basetti featured in the gallery. Faces of passersby appear in the window to look at the beautiful photograph on display. Gobbi heads upstairs to his studio to begin his workday and capture portraits of whomever is on his calendar for the day. Visitors come into the gallery to ask Gobbi about the work on display. He explains Basetti’s unique photos: As a child, Basetti admired adventure movies like the Indiana Jones series, inspiring him to photograph stunning abandoned villas all across Italy.

“They have become my Temple of Doom,” Basetti says on his website. “I am an anachronistic presence inside these forgotten places, where in some cases the uncontrolled nature takes back the place once stolen by mankind.”

Basetti’s work has been on display for about a month and will remain at the top of Via Raffaello until August 7. Gobbi renovated this former dress shop five months back into a modern, clean space where the focus is simply photography. The bottom floor will rotate a variety of photographers on display.

“Giancarlo is doing a great job to try to raise awareness of the artistic work behind a photographer’s work,” says Basetti. “In a city of art like Urbino, it is a pity that there are few opportunities for events related to the art of photography. Giancarlo is contacting the main competent public bodies to move the waters a little.” Situated on top of Via Raffaello only feet away from the iconic statue of Raffaello, a symbol of traditional art in Urbino, Gobbi is opening Urbino’s eyes to a new art form.

“Gobbi has brought more tourism and his shop fits very organically at the top of the street,” says neighboring business owner Luca Rusciadelli, standing in his wine shop across the street from the gallery. “I have been in his gallery and I love it! I really admire what it brings to the street.”

The community on the top of this street, which includes a bakery and a frame shop in addition to Rusciadelli’s wine bar, thrives with personality and welcomes both tourists and citizens of Urbino. “All of our shops work together and support one another,” Rusciadelli says. Giorgio Duranti, owner of the frame shop a few doors away, strolls in to have a glass of wine and a smoke. Says Rusciadelli, “This is the proof!”

With the logo for a future photo festival displayed on his computer screen, Gobbi explains his plans for Urbino. Ambition sparkling in his eye, Gobbi says he hopes to take advantage of the unused shop spaces in Urbino to create more photo galleries across the city.

“We hope to display younger photographers because this is a very low-budget project and we just want to give younger, less established photographers the exposure they need,” he says.

In the coming years, Gobbi’s plans include an annual photo festival with the help of the School of the Book, a respected art school in Urbino, that will bring photographers to the city and inspire others to take up the art form. Urbino, says Gobbi, might one day be as rich in photography as it has historically been in other arts.

Translation of interviews and other language assistance by University of Urbino students Lorenza Abbondanza and Sara Gabellini.

When I first came across this program, little did I know that it would be an experience of a lifetime. I had no idea what was in store for me when I first arrived in Urbino. Coming to Urbino has forced me to go out of my comfort zone—and I could not be more grateful. Urbino has quickly become one of my favorite places and it was the perfect place for me to have my study abroad experience. I have multiple places that I am lucky enough to call home: Virginia, James Madison University, and now Urbino, Italy. This quiet but lively small town has been so good to me; Urbino forced me to immerse myself in the Italian culture and learn so many new things. I am leaving this place with a newfound love for Italy, amazing new friends, lots of funny stories, and an experience I would recommend time and time again. Lastly, I want to give a huge thank you to my parents for letting me come to Italy and be involved with this amazing program! I can’t wait to come back to Italy someday!