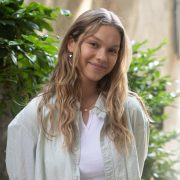 I have always wanted to study abroad during college, but…

At Cooperativa Sociale Francesca, young adults with disabilities learn skills such as preparing and serving restaurant meals. "They are all immensely skilled," says the organization's director, Antonio Bernardini. Photo by Anelise Johnson.

The organization's restaurant glows from within as an event for funders and supporters begins. Photo by Grace Clukey.

Barbara (left) and her coworker chat amiably while working. "I like that we are all close," says Barbara. Photo by Grace Clukey.

Made to order, the ceramics and other items that go into the Cooperativa's bomboniere, or party favors, are among their most popular products. Photo by Grace Clukey.

Tiziano Rossetti (right), chef at Osteria L'Angolo Divino, guided the workers as they prepared aperitivo for the evening event. Photo by Anelise Johnson.

The aperitivo started off the five-course meal. Photo by Anelise Johnson.

With a smile, Zaccheo brings the first course out of the kitchen. Photo by Anelise Johnson.

Barbara introduces the volunteers and thanks them for their help with the event. Photo by Anelise Johnson.

Manu Magnoni (right) and his cousin Zaccheo beam with joy over the successful evening. Photo by Anelise Johnson.

URBINO, Italy – Laughter travels down the gravel path from the entryway, and summer evening sunlight streams through the windows of Cooperativa Sociale Francesca. Workers rush in and out of the kitchen, as the aperitivo is about to be served. Manu Magnoni, whose cousin Zaccheo* is among the hard-working servers, pauses for a moment before explaining why he and his wife, Sarah, have come to the event. Tears fill his eyes as he says, “It is the first place I go whenever I return to Urbino.”

Cooperativa Francesca, located on the northern edge of Urbino, is an organization that employs young adults with intellectual and physical disabilities, but it is much more than a charity. Outsiders may be surprised to learn that the organization, housed in a quaint, classic Italian building, holds a multi-business workshop and a restaurant. At the Cooperativa, young adults with disabilities are given the chance to learn and exercise skills that promote creativity and individuality. Whether in the upstairs workshops crafting ceramics and wedding favors, or downstairs in the restaurant prepping meals or serving guests, these services benefit not only the workers but the entire community.

“They are all immensely skilled,” says the organization’s director, Antonio Bernardini, smiling. He recalls a debate among the staff about which workers were best suited for which jobs, claiming it was pointless to argue because they are all talented in their jobs. “It is the joy of seeing the workers doing what they love and doing it well,” that, Bernardini says, makes the organization special. That, he says, is the message that Cooperativa Francesca hopes to communicate to the public: “Everything we do, we do with love.”

There are usually 16 workers with disabilities at Cooperativa Francesca, but fewer have been active in the past couple of years due to COVID. Staff members along with volunteers assist the workers in learning new skills and improving their performance. The first service the organization provided was the creation of wedding and ceremony favors, called bomboniere, which include ceramics and other hand-made products. In 2021, the organization opened a restaurant on the first floor of the building where workers could learn the fundamentals of cooking and serving. “Ceramics used to be my favorite, but now I love to serve in the restaurant,” says Zaccheo, who has been working for the organization since 2010.

“It is the joy of seeing the workers doing what they love and doing it well,” that, Bernardini says, makes Cooperative Sociale Francesca special.

On a typical day, Zaccheo and his fellow workers arrive at the Cooperativa at 8:30 a.m. by bus, getting straight to work on ceramics and ceremony favors in the upstairs workshops. While diligently painting, stitching, folding, and carving, the workers chat about wanting to go to the beach to escape the heat. “I like that we are all close,” says Barbara, while folding aprons with her coworker. After a brief break, it is time to begin work in the restaurant for lunch customers. “This is most workers’ favorite part of the day because they get to interact with the community,” says staff member Silvia Amadori. The workers’ day typically ends at 3 p.m. unless there is an event that evening that they need to work.

Amadori says employees with disabilities choose Cooperativa Francesca over similar organizations “because they feel a greater independence at this one, they feel like they are working like anyone else.” Though it is not the goal of the organization, employees will occasionally move on to work elsewhere, but it can be difficult. In one case, an employee tried working somewhere else but returned because, unlike his supervisors at Cooperativa Francesca, his new boss did not respect the amount of time it took him to complete tasks.

The organization regularly hosts events for the community in the evenings, like the one that Manu and Sarah Magnoni are attending that summer evening. The event, called Il Buono del Bene (The Greater Good), is a five-course dinner for about 50 funders and supporters. Volunteers Tiziano Rossetti, chef of Osteria L’Angolo Divino, and Raffaele Papi, a sommelier, guide the workers in plate presentation, pairing wines to each course, and serving the guests. Papi, also a cousin of Zaccheco, says he volunteered because of his appreciation for the organization that has given so much to his family.

Prior to each course, a worker comes out of the kitchen to announce the food and wine. “I am nervous and excited to be speaking in front of you all,” says Barbara before delivering the name of the next course: “Pinzimonio Ecco! Scusate, data l’emozione un po.” (“Here is Pinzimonio—raw vegetables with dressing! Sorry, having a moment.”) When the dinner ends, coffee is served and guests begin to walk around admiring the artworks and trinkets for sale. At this moment Zaccheo and Magnoni share a hug, delighted over the night.

At the end of the evening, the workers and volunteers stand together, thanking the guests for helping make the night a success. The workers’ faces light up with joy as a round of applause fills the room.

*For privacy reasons, Cooperativa Francesca asked that the last names of their workers not be used.

Translation of interviews and other language assistance by University of Urbino student Lucia Piazzalunga.

I have always wanted to study abroad during college, but I had no idea how much the experience would impact me. Urbino is the first place I have visited outside of the United States, and it now feels like home to me. I have found comfort in this city, in the breathtaking views, and in the people that I have met here. Having no previous journalism experience, I was forced to step outside my comfort zone during this program. Thanks to my professors, mentors, and translator, I discovered a passion for journalism through the story I covered. I couldn't have asked for a better study abroad experience; the memories I've made here from the places I've visited and the people I've met will last a lifetime, and Urbino will always hold a special place in my heart.