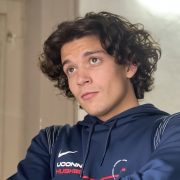 My experience here in Urbino was nothing short of exciting.…

Alessia Dottori, 21, was diagnosed with celiac at age 9. She has had her fair share of troubles along the way.

The gluten-free section of any market is an essential aspect in a celiacs life.

The gluten-free section of any market is an essential aspect in a celiacs life.

Through cleaning and special care, the pasta is ready to be cooked

Through cleaning and special care, the pasta is ready to be cooked

Chiara Monti, the brother of Roberto is an instrumental part in the kitchen

Chiara Monti, the brother of Roberto is an instrumental part in the kitchen

A finished gluten-free dish that one with celiac might enjoy

A finished gluten-free dish that one with celiac might enjoy

Each step in the process, stove to stove, bowl to bowl, is an integral part of cooking gluten-free

Anita Bussu, who is 26-years-old has had celiac since she was a girl

Anita Bussu, who is 26-years-old has had celiac since she was a girl

The Taste of Italy for the 1% with Celiac Disease

In the land of pasta, pizza, and other all-you-can-eat gluten foods, you might think Italy is a big problem for those with celiac disease.

Instead, Italy leads the world in celiac awareness. This disease, which causes severe intestinal damage and a wide variety of symptoms, is accommodated by national public policy and by the practices of most Italian restaurants and grocery stores. The government screens children and adults for celiac when specific symptoms arise. Being “gluten-free” as a mere preference and fad doesn’t count. People certified with the disease are given monthly allowances, like food stamps.

These procedures recognize the suffering of those with celiac. Symptoms range from abdominal pain, skin rashes, and brain fog to depression and anxiety. So, how do people suffering from this disease navigate through pasta heaven?

“It is possible to survive,” says Alessia Dottori, 21, a University of Urbino student with celiac. Because of her condition, Dottori doesn’t have a favorite restaurant in Urbino, despite the many excellent choices. Eating out is off the table. Any amount of gluten in her meal out can cause severe reaction, so she prefers to dine at home.

In Urbino, where every restaurant is within an easy walk along narrow cobblestone streets, you can find gluten-free signs out front and on menus. Gluten-free items on the menu are not for a fad but for celiac. If you ask for a gluten-free dish, you may be asked, “Sei celiaco?”

For 34 years, Roberto Monti has been a chef at Vecchia Urbino, a restaurant with intimate tables inside and out on the quiet alleyway of Via dei Vasari. He and his sister, Chiara, have worked in the kitchen there since they were children, and now run the family business along with their mother. He has seen the evolution of celiac awareness in his country. In the kitchen, he pays close attention to his work, step-by-step separating plates, pasta, water, and other tools to craft the best gluten-free dish.

Italy’s progressive attitude toward celiac is a roadmap for other countries struggling to improve the welfare of those with this disease. Since the 70s, Italy has acknowledged celiac and implemented policies with food cards and school lunches that cater to those with celiac. The AIC, Associazione Italiana Celiachia, is a vital resource for many looking to travel here with this disease, as it certifies whether a restaurant is deemed safe to eat gluten-free in.

Although this sounds like a silver lining, there are no restaurants in Urbino that are AIC-certified. Many do produce “gluten-free” dishes, but it is best to check with local contacts and the AIC first.

The disease affects 1 percent of the Italian population, although the proportion of those officially diagnosed is much lower, according to a 2020 article in Il Ducato, a publication of the University of Urbino’s journalism school. The government’s rate for the Marche region was 0.31 percent, one of the lowest in Italy, according to the article.

While Italy is ahead of the curve, it’s not perfect. Cross-contact among dishes in restaurants is taken seriously by most owners and cooks, but not by all. Monthly stipends provided by the government – usually around 90 euros for those diagnosed with celiac – don’t cover the extra cost of eating gluten-free. A bag of regular pasta may cost half a euro, but a gluten-free bag is nearly three euros. This is an aspect that makes it difficult for those with celiac because cooking from home is an integral part of living with this disease.

Urbino has some restaurants listing menu items “senza glutine,” which means gluten-free. But most are pricey and not accommodating to strict guidelines in the kitchen. Cross-contact among any dish used for separate foods containing gluten can cause a reaction in those with the disease. Water used to boil pasta, spoons, and other kitchen ware that have been used in gluten-containing dishes can cause severe reactions, and in rare cases, death.

Getting Diagnosed in U.S. vs. Italy

Catalin Varela, a gluten-free travel consultant based in Florence, is an American writer with celiac. Any gluten affects her.

“I would forget my own name, forget where I was,” said Varela.

Her diagnosis was nothing short of a nightmare. U.S. doctors misdiagnosed her with cancer until she brought up celiac disease. An endoscopy, the gold-standard for testing in the United States, was performed. The whole process was troubling. She found many problems with how celiac disease is handled, in the doctor’s office and in the kitchen.

She ate that pizza. But what she had thought was gluten-free was normal pizza.

“What is the point of me going to a doctor’s appointment if I know better than the doctor,” said Varela. She eventually found some semblance of peace in Italy.

In Urbino, Dottori knows all too well about the pain celiac can cause her. Growing up in Cupramontana, a small town in the Marche region, Alessia was diagnosed with celiac disease at the age of 9. Her skin would blister and become red, her stomach bloating with crushing abdominal pain. She rates the pain as an 8 out of 10 when it comes, feeling ill and scared for what may come next.

In the summer of 2016, 15-year-old Alessia went to a party with her friends. When they got hungry, they decided to order a pizza, with strict directions to include a gluten-free pizza for Alessia. She ate that pizza. But what she had thought was gluten-free was normal pizza. The restaurant had made a mistake, leaving her ill for months. “If this was somebody else, they could have died,” said Alessia.

Today, Dottori has found a way to navigate through pasta-land, but still feels not enough is done. Majoring in education science at the university, she hopes to help others through education. She radiates strength and compassion for those newly diagnosed.

It’s not just about surviving, she says. It’s about thriving in a world without gluten.

Translation of interviews and other language assistance by University of Urbino students Sara Gabellini and Lucia Piazzalunga.

My experience here in Urbino was nothing short of exciting. This journey and its memories will stay with me forever. Before coming, I told my mom how crazy it was, to be traveling halfway around the world, not knowing anybody. Coming to a small town I had never heard of until I read a school email. I wouldn’t have thought I’d end up here, speaking messy Italian, drinking vodka-lemons, and meeting a whirlwind of new friends from home and abroad. But here I am, writing about something so interesting, taking photos of wonderful people and places, it feels like a dream sometimes. This opportunity wouldn’t have been possible without the helpful faculty who arranged it all, my amazing parents, and the friends I made along the way. So I’d just like to say thank you all!