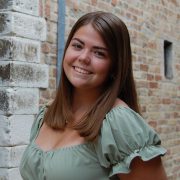 Having never travelled to Europe, I knew this trip was…

Franco Bigini was commissioned to restore over 200 stone signs in the historic center of Urbino, costing the city 25,000 Euro.

He stands looking up at one of his projects, a sign on a wall that borders the Ducal Palace.

Bigini has worked on almost every street in Urbino. This particular location is between the windows of the Town Hall office.

Once the letters are filled in, Bigini puts a finishing sealant on the stone so his restoration is protected.

The first part of restoring this sign included scrubbing it down with a sponge.

Bigini is a well known man around town and is frequently stopped by friends passing by.

When asked what supplies he used, Bigini replied with, "The list is a mile long." But some tools include, sponges, syringes, and paintbrushes.

At the end of his work day, Bigini takes apart his twenty-three foot scaffolding.

Bigini loads the scaffolding in piece by piece into the bed of his truck.

Bigini loads the scaffolding in piece by piece into the bed of his truck.

The scaffolding pieces are secured using a strap that Bigini tightens before he drives away.

Bigini loads his truck in front of the Duomo as he comes to a close on his restoration across the street at town hall.

URBINO, Italy — The scaffolding in front of Town Hall has two of its steel supports propped up with extra wood to compensate for the cobblestone street’s slope. The man standing on a four-by-six-foot platform two floors up seems oblivious to any danger.

He is concentrating on his work, using brushes, spatulas and syringes to restore the capital Roman letters engraved in a stone marker. It is from 1954, one of the newer historical signs in a city that takes pride in its last 500 years of history and architecture.

“. . .AGLI INVITTI ED INVINCILI IDEALI DELLA LIBERTA” it reads, in letters that Franco Bigini is carefully filling with black paint. This sign honors those who resisted the occupation of Urbino by Nazis and Fascists “for the undefeated and invincible ideals of liberty.”

Bigini, a self-taught art restorer, was commissioned by Urbino to restore signage installed since the 18th century. Over time, these signs have faded into the brick and lost the shine and attention they used to have.

The project to restore 140 of such signs – and another 150 street names also engraved in stone – began in February and is to end in July. With this 25,000-euro project, Urbino maintains its reputation for being the only city center in the Marche region of Italy recognized, since 1998, as a UNESCO World Heritage Site.

It’s an honor for me because Urbino is the town I grew up in.
—Franco Bigini, hired to restore the city’s historical and street-name signs

Bigini took on this project as more than just a job. Bigini is originally from Belgium, but moved to Urbino when he was a child. As a result, Bigini feels a personal connection to this particular project, stronger than to others he works on outside of Urbino.

“It’s an honor for me because Urbino is the town I grew up in,” he said.

First introduced to restoration work by his cousin, Bigini gained a passion at a young age.

“I grew up doing this work,” starting at age 17. Now he’s 61. “So, 44 years of restoring. It is a job that has become a passion.” He smiles when he compares his work to that of Renaissance artist and Urbino native Raphael Sanzio, since Bigini chose not to go to school but to learn his craft by doing it.

Urbino’s deputy mayor, Massimo Guidi, said he is very pleased with the work Bigini is doing for the city. “Bigini is a very hard worker with a calm disposition. Very professional.”

Weather permitting, Bigini works early in the morning until late in the afternoon, with a lunch break in between. A typical work day starts at 7 in the morning, when he first starts to assemble his scaffolding. The 23-foot tall scaffolding breaks down into many pieces so that he is able to fit it into the bed of his truck along with his other supplies.

It is not difficult to find Bigini as he towers over Urbino on his scaffolding. Some signs take just one day, while others take three to four. “It depends a lot on the state of conservation, but some inscriptions are very damaged and can take twice as long,” Bigini said.

He has worked in other historic cities in the region such as Fossombrone and Senigallia. But Urbino has a special meaning for him, as it is his childhood home.

After 44 years, he wants to continue restoration work as long as his health allows. “I have six years to work before retirement, but if I am healthy by then I will certainly continue to work.”

Keeping up his passion after cleaning and restoring signs in the June heat—is that easy?

Having never travelled to Europe, I knew this trip was going to be an unimaginable experience, but my expectations were most definitely exceeded just after one day of living in Urbino. Although Urbino is such a small town, it has taught me bigger things that I am going to remember and carry with me for the rest of my life. This once in a lifetime opportunity has not only helped me grow my skills with regards to media, but it has also helped me discover who I am and showed me what I want to contribute to this world. I learned that friends come from the most unexpected opportunities like this one. I learned that if you are passionate enough about something, it doesn’t feel like work. And most importantly, I learned that a trip to the gelato shop is the best way to procrastinate getting work done. I cannot thank Urbino enough for what its given, showed, and taught me; as well as the strangers that turned into lifelong friends. Until next time, Urbino!