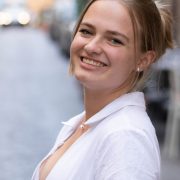 I feel incredibly lucky to have experienced this program. Even…

Organic farmer Michele Gili leads a herd of goats out to pasture at his farm, La Fattoria di Urs. He takes the goats and cows to alternating pastures every day after they have been milked, one of the many sustainable practices the farm has adopted to help manage resources and survive climate change.

The farm's goats can eat any of the greenery around them.

Gili does the morning milking of cows.

All electricity at La Fattoria di Urs is provided via solar power.

The farm's founder, Urs Abderhalden, stands next to the solar panel that heats the water in his house.

The first solar panel on the farm collects the sun's rays to power the house of Urs Abderhalden and Maja Ambuhler.

The cows remain calm but moo loudly while they are being milked.

Urs Abderhalden says he envisioned a farm that was environmentally friendly in all of its practices. Rather than drive 500 kilometers to Rome to protest, he says he preferred to simply practice what he could where he was.

Michele Gili sanitizes the milking equipment. In an effort to use zero chemicals, the tools are sterilized only with boiling water.

Michele Gili cleans the cow pens before letting the animals out to graze. The proper care of the animals and their habits affects the quality of milk and meat products, so La Fattoria di Urs makes a great effort to take care of its livestock.

Flavia Abderhalden pours cheese curds into molds. She does this every day to make both goat and cow cheeses.

Cheese made in the previous days rests on racks before it is wrapped and sold.

Containers of yogurt rest in the fridge to later be sold by fair trade groups and in shops all over Le Marche.

Despite the challenges, La Fattoria di Urs operates in an eco-friendly way

URBINO, Italy—In the heat of an early June morning just outside of town, the soft clump of hooves echoes over a green hill. Speckling the hill with a warm brown color, a small herd of goats grazes over flowers and grass, narrowly avoiding a solar panel nestled against an abandoned farmhouse.

They topple over the remaining landscape, shoving each other and playing without any genuine concern for their surroundings. But there is a respect for the solar panel and the electric fence it powers.

Adding an abrupt blue shine to the typically rustic landscape, these solar panels are just one of the many ways that La Fattoria di Urs works with its environment. They are the farm’s main source of electricity. They heat water, power lights, and keep the goats and cows from wandering into the wilderness, where they’re subject to wolves and other predators.

An all-organic, environmentally conscious, family-run farm, La Fattoria di Urs, encourages a symbiotic relationship between its environmental efforts, its animals, and the consumer.

Despite their eco-minded efforts, they still face the consequences of man-made climate change. Just north of the farm, the Po River, the longest river in Italy, is drying up. Over a hundred towns are being asked to ration water by suspending drinking water supplies nightly. This lack of water isn’t just being felt by those who rely on the Po, but also in the rural areas of Urbino.

“We have seen the effects related to climate change, especially relating to the drought,” says Flavia Abderhalden, a second-generation farmer and owner of La Fattoria di Urs.

These inconsistencies in weather actively damage animal habitats and crops. While the practices of biodynamic farming protect Abderhalden and her husband Michele Gili to some extent, they deal with these irregularities firsthand on their small farm.

Abderhalden slowly works her way down a line of patient goats, gently milking each one while they eat and stomp indignantly.

In previous years the issue has been constant rains causing flooding and landslides. Now the drought has been bad enough to stop seeds from sprouting.

“These problems don’t only affect us but all the farmers like us,” Abderhalden says. “All producers, large and small, have to face climate change, and with adverse climatic events, the production decreases. This is a problem for everyone.”

Organic farming is widely accepted as the more sustainable alternative to industrial farming. Farmers like Abderhalden and Gili are not reliant on chemical fertilizers and prioritize the quality of life for the animals over production.

Industrial farming causes more issues than not. In a recent article in the publication AIMS Agriculture and Food, co-author and University of Urbino professor, Elena Viganò, explained that the loss of soil fertility, biodiversity, and a growing population that must be fed, has caused organic farming to become more and more essential. Viganò and colleagues report that in the province of Pesaro and Urbino many farmers are hesitant to transition because of miscommunication in their communities.

For Abderhalden and Gili it is clear that clinging to industrial farming isn’t the solution. “To maintain this lifestyle we [would] need three planets,” says Abderhalden.

For Abderhalden’s family at La Fattoria di Urs, this commitment goes beyond standard organic farming. According to Gili, it is a commitment to land stewardship and environmentalism. It is an investment in the health and happiness of the animal.

A baby goat cuddles up to Gili, attempting to nibble at his shorts. A soft smile spans his face and he begins to scratch between the little goat’s horns, “They like when you do this,” he says, encouraging the goat away from eating his shorts, “We do our best to make them comfortable. If they don’t like us, it shows in the product.”

Industrial farms cannot care for the animals and land in this way, says Gili. It is often more efficient for them to feed their animals genetically modified feed and only use one pasture. This eventually causes nutrient-lacking soil that is unable to produce grass and other small plants, like alfalfa, that are essential in the animal’s diets.

“This is good for droughts,” Gili explains, holding a sprig of alfalfa that he’d picked. “It’s also high in protein for the cows.”

Environmentally friendly practices have extended benefits to them, Gili explains. For example, the sun is such a plentiful resource that it just makes sense to use it for electricity.

“This year more than ever we are aware of the importance of our photovoltaic and solar panels to produce energy and hot water,” Abderhalden and Gili posted on their Facebook in March. “Not only on an environmental level but also for autonomy from the crazy mechanisms of politics and economics that shake our world.”

Energy independence allows the farm to adjust for the high costs associated with its business. It heats their water and provides the entire farm with electricity.

“It’s not just about environmentalism, it is about democracy and autonomy,” said Urbino Mayor Maurizio Gambini.

An older gentleman with an extended grey beard and a weathered face takes a break from working on housing renovations to join the conversation. He is Urs Abderhalden, Flavia’s father. He explains that when he established the farm decades ago, citizens of Italy weren’t always allowed to produce their own energy. Now, he says, it is integral to their business.

“It’s not just about environmentalism, it is about democracy and autonomy,” said Mayor Gambini. “When the war started in Russia, industrial farmers took a hit. They purchase all chemical fertilizers from Russia, and the prices went up. Organic farmers don’t use these chemicals, so they were unaffected.”

Gambini aims to make Urbino more energy efficient in the near future so that citizens can be both the producers and consumers of their own energy. This way no one is subject to gas and oil prices. This is especially important in light of the gas crisis caused by the Russian-Ukrainian war.

For farms like La Fattoria di Urs, this concern of energy efficiency is as simple as following their philosophy of respecting the land—a practice they don’t see in industrial farming.

“People should understand that the industrial farmers are not the solution,” says Gili. “It’s not sustainable.”

According to a recent article from The Center for Ecoliteracy, a group that works to educate children on sustainability, “Industrial agriculture contributes about 25 to 30 percent to global greenhouse gas emissions.” It is also responsible for a decrease in biodiversity, and an increase in monocultures—the growing of a single crop in one area—which typically damages the ecosystem. Farms like La Fattoria di Urs actively fight against monocultures and encourage a more balanced ecosystem. They have a lower environmental impact.

“These types of farms are doing something that isn’t just good for the environment, but also for the people and the quality of the product,” says Gambini.

Abderhalden’s father says he originally envisioned a farm that was environmentally friendly in all of its practices. Rather than drive 500 kilometers to Rome to protest, he says he preferred to simply practice what he could where he was.

Now his daughter makes cheese from their organic products just outside his home every day. While the milk is organically certified, they chose to save money and not get the organic certification for the cheese. The quality of the product stands on its own.

“Our customers know the quality of our product,” says Abderhalden, “and they know how we make the cheese.”

She gently cuts cheese curds to pour into molds. Moving with a familiar rhythm she explains that bureaucracy makes running a farm difficult. It doesn’t have much to do with what they provide the land and animals, it doesn’t change how they care for every calf that wanders across their beloved farm. And maybe a certification would change something, she says, but they continue to do things in a high-quality way no matter the official certification.

You cannot always get recognition for doing what you believe is right. That doesn’t mean you’re not making a difference.

Translation of interviews and other language assistance by University of Urbino students Sara Gabellini, Lucia Piazzalunga, and Linda Marangoni.

I feel incredibly lucky to have experienced this program. Even when my initial story took a turn and I had to start over there was no point where I felt like I had failed to gain meaningful experiences (and I mean is anything really stressful if you end your day with aperitivo?). I’ve been able to connect with local farmers, students, business owners, and public officials in the process of developing my story. Following an economic and then an environmental pitch I was able to learn so much about this community, the struggles they face the strengths they possess. I’ve seen things my little art-loving heart has only dreamed of and learned a lot about how to report abroad. I’ve made good friends who have been kind enough to welcome me into their lives and show me Urbino from their perspective. I was also able to improve upon my reporting skills in a way that is simply inaccessible to most college students. Urbino is an outstanding city filled with wonderfully kind, and welcoming people who have made this trip stand out from any other. I simply could not be more grateful that I was able to experience this wonderful place and will certainly be returning should I ever be so lucky again.