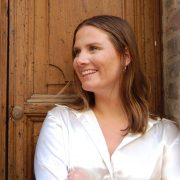 This experience has been a trip of a lifetime and…

Laura Stanell, a rising sophomore at the University of Cincinnati, practices voice and stage direction in front of faculty, Edward Crafts and Heather Ross.

Joanna Percy (left), a rising sophomore at Wheaton College, listens in as student Lauren Manon (right), a rising senior at Southeastern Oklahoma State University, gives her advice on a note in one of her arias.

Katelyn Karcher, a rising senior at the University of Mobile, listens to Musical director and coach, Stephen Dubberly.

Katelyn Karcher (left), Hadassah Misner (middle), and Laura Stanell (right) play around to ease some nerves before their performance at Casa della Poesia.

Performers take their seats at Casa della Poesia moments before the start of their concert.

All the members of Opera in Concert perform “Va, pensiero (Nabucco)” for the final song of the concert. Following this concert, the program concluded.

At 58 Doug Brunker is still perfecting his craft

Urbino, Italy- It’s mid-afternoon and arias from tenors, mezzos, and sopranos bounce off the cobblestones of Via Valeria as eight American opera students work at perfecting their craft. They look like any of many opera students that flood Italy each summer: Under 30, full of dreams, and eager to start their careers on the world’s opera stages.

At the end of the row stands a shorter, slimmer, balding man with a salt and pepper beard. Doug Brunker is a 58-year-old tenor singing along with the rest of the class. Clearly, he is not at the beginning of his career.

“People find different pathways in retirement,” he says. “When you learn to play an instrument, or you sing, or you do something musical, you never finish. You are never done.”

Brunker and his classmates belong to Texas-based Opera in Concert that has been taking American opera students to Italy for 15 years.  The Renaissance city of Urbino provides the perfect cultural and historical setting in the country where opera was born.

This three-week program costs $4,000, not including airfare, and challenges students musically, linguistically, and culturally. Each day they attend four hours of Italian language class followed by four hours of voice coaching, private singing lessons, or staging.

For most students the cost of the program serves as continuing education, a valuable experience that cannot be replicated in a university setting.

Brunker is here for other reasons.

His journey to discovering opera began with a love of singing while growing up in Utah. “I’ve always sung,” he said. “I was just one of those singing kids.”

In the 1980s he gained one of opera’s fundamental skills – speaking Italian – while preparing for his Mormon mission to Sicily.

And his growing love for opera also became a balm for the world he saw as a social worker treating patients with serious problems including child abuse and neglect, mental illnesses, and devastating diseases such as HIV/AIDS.

While he said his work was rewarding, Brunker recalled being burnt out and lucky to have retired four years ago.

“Things that I got exposed to in my career were really emotionally challenging and singing completely distracted me from that,” he said. “And I could go and be on stage in an opera and not think about the stories or situations I had dealt with that day.

“Singing has always served me. And now I can just focus on it and get better.”

So, it’s sort of like the American gymnast team doing these amazing floor and beam exercises and where everybody is just like ‘What? They make it look so simple.

While Brunker has sung his whole life, it wasn’t until he met Opera in Concert director Edward Crafts six years ago that he became serious about operatic technique.

“For singing, it’s the Olympics,” he said of the challenge of opera. “It’s like the top of the game.”

“You are learning to use all of your instrument, even when you’re singing so soft and sweetly, you’re using your whole body in exactly the right way.

“So, it’s sort of like the American gymnast team doing these amazing floor and beam exercises and where everybody is just like ‘What? They make it look so simple.’

“That’s what opera singing is.”

But he does find his senior status among the other students a little “weird.”

Some call him their “Den Mother.” His experience in European travel, speaking Italian and learning how to drive a standard shift (the most common type of car in Europe) made him the go-to source on their travel to Urbino.

“I find them sometimes looking at me as a person in charge which I kind of am because I meet them at the Bologna airport and help them get on a train,” he said.

“So immediately they associate with me like ‘That guy helps.’”

To Brunker, participating in programs like these aren’t out-of-the-ordinary. In fact, he finds it odd that he is the only person his age here. He hopes to see more people his age in similar programs in the future.

Because, he says, with music “there’s no finish line”.

This experience has been a trip of a lifetime and I am so grateful to have had this opportunity to participate. Initially, I was a little bit nervous, never having been out of the country, but Urbino has felt nothing but home. This experience took me out of my comfort zone personally and academically and I am so thankful for all my mentors, professors, translators, and students I got to build relationships with. I will never forget this month I spent here, and this trip has made me want to see the world even more! While I am sad to leave Urbino, I know I will cherish these memories forever. Grazie Urbino, ciao!