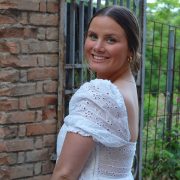 Studying in Urbino has been a once-in-a-lifetime experience. Before the…

Heralded as the “Father of organic farming in Italy” Gino Girolomoni was the founder of Girolomoni Agriculture Cooperative. His legacy lives on through his business, which promotes sustainable farming and produces over 11,000 tons of organic pasta exported across the world each year.

Lush wheat fields surround the property, getting ready to soon be harvested and transformed into organic pasta.

Giorgio Olivier, a worker at the Girolonomi Pasta Factory, is switching the pasta extruder to change the shape of the pasta. Girolomoni Cooperative produces over 50 different kinds of pasta varying in size, shape, and grain type.

Orecchiette pasta is bouncing down the conveyer belt, preparing to go into the oven.

Boxing the pasta for shipment

The organic pasta is getting boxed up, ready to be shipped around the globe.

Olivier enjoys working at the Girolomoni Pasta Factory. What makes this pasta factory different is that clients know exactly where their supplies are coming from, and trust that their product is 100 percent organic and fresh.

Maria Girolomoni, center, and her family, enjoying a nice summer evening dining at the restaurant at the Locanda. The Locanda currently sees over 5000 visitors per year in which guests can see the whole experience of the cooperative with their own eyes.

Maria Girolomoni smiling with Peppino Paouini, a founder of the cooperative, and a lifelong friend of Gino. With the help of all the founders, the cooperative fully transformed their hometown of Isola di Piano agricultural and economically.

Isola del Piano, Italy – “What are they thinking?”

“They must be crazy!”

It was 1971 and those judgments were being passed around this small town in central Italy about 25-year-old Giro Girolomoni. That’s because he was espousing this crazy idea about something called “organic farming.”

Fifty years later no is calling him crazy.

Girolomoni, who passed away in 2012, now is heralded as the “Father of organic farming in Italy” and the founder of a sprawling commercial operation producing over 11,000 tons of organic pasta which is exported across the world each year.

“It might be true that our ideas were mad,” Gino said in 2010, “but our madness has become a market.”

Pasta has long been a key component of Italian culture. Italy’s warm climate and fertile soils provide the perfect environment to grow wheat as well as the succulent vegetables and herbs to accompany pasta. Italy has historically been the world’s largest exporter of pasta, and in turn, the largest pasta consumer.

Pasta has become key to Italian life. Families pass their pasta recipes and techniques down from generation to generation. Once the pasta is cooked, families will share the meal together, savoring the fresh flavors and the conversations held at the meal.

The Girolomoni Agricultural Cooperative is one of the most well-known organic pasta producers and exporters in Italy. But behind this name, lives the idea of a whole business “ecosystem” that has many different branches. These include agritourism, an educational foundation, farms, and storefronts.

According to the company’s mission statement, these all are rooted in a single value: to “Restore dignity to the land” through sustainable farming processes.

It was a long journey, as recalled by his daughter, Maria, 33, Director of Public Relations and Communications, in a recent interview.

In 1971 Isola del Piano was an economic wasteland. There were few jobs and agricultural production was poor.  Residents were leaving the land and scavenging for employment in nearby cities.

Girolomoni had lost his mom when he was very young due to illness and had to care for his ailing father. While working on area farms as a laborer to support himself and his father, he learned an appreciation for the environment.

In his early 20s, he left the area for Switzerland searching for fulfilling work, but soon realized his true calling: To reshape the economy and agriculture of the community that raised him.

He returned to his hometown motivated by a dream and with the endless energy to make it a reality.

Asked to describe her father in one word, Maria said he was “a volcano”.

Like a volcano, Gino’s heart was full of a fire which ignited his passions, Maria said. He was a spiritual person and took much inspiration from his faith, as well as art, poetry, and the environment.  In 1971, Girolomoni and his wife, Tullia, purchased the crumbling ancient Monastery of Montebello in his hometown and renovated it “brick by brick,” Maria said.

While restoring the monastery, Girolomoni thought that just as a monastery provided helped restore faith and hope in others, his business idea could restore jobs and faith in his homeland.

People thought they were crazy for going against the current. They thought this young couple coming into this little village could not produce anything successful.

In 1977,  he founded the Alce Nero Cooperativo with five of his friends on the Montebello Monastery property. Its main purpose was to cultivate a fully organic farm that had zero impact on the environment.

“He wanted to transform agriculture into something that was safe for everything: people, animals, the environment, and for future generations,” said Maria.

When the Cooperative was established, Gino and Tullia were still their late twenties.

“People thought they were crazy for going against the current,” Maria said. “They thought this young couple coming into this little village could not produce anything successful.

“He was looking beyond the scope of what others could see.  He had a purpose to fulfill.”  He wanted the opportunity to share his passions with others, to inspire others to give back to the environment and live a sustainable lifestyle, she added.

The cooperative’s major goal was not just to grow organic wheat but oversee every step of the pasta supply chain process. That was accomplished.

Today the company controls each part of the organic pasta-making process from planting the seeds of wheat, to serving fresh organic pasta on the table. They hold an advantage over their competitors because their clients know exactly where their supplies are coming from, and trust that their product is 100 percent organic and fresh, Maria said.

The Girolomoni Cooperative strategically chose areas for its wheat fields, supervised by an agronomist, who ensures the quality of the land and verifies the farms are pesticide- and GMO-free.

“When we started, our land was a ghost town,” said Peppino Paouni, one of the founders and lifelong friend of Gino. “It was a disaster. There were no trees, no hope in our town.”

With their hard work and motivation, the Cooperative totally transformed the area from a wasteland to an abundantly fertile land agriculturally and economically.  Now 70-percent of their wheat is coming exclusively from the surrounding property and their region of Le Marche.

As the business grew, so did the number of visitors. In 1990, the Cooperative decided to build the Locanda Girolomoni – an inn – solely for hosting guests.

“We wanted people to have a place to rest and eat,” said Maria.  “We also wanted our customers to be able to touch the product with their hands.”  The locanda now sees over 5,000 guests per year.

His legacy still shines bright through his children. Maria’s brother Samuel manages the farm processes, and her other brother Giovanni is the president of Cooperative.

“Just like a mulino (mill) we must keep going, and keep working towards our vision and goals,” she said.

Perhaps Gino’s greatest legacy are his words printed on a bright orange sign which greets visitors arriving at the Girolomoni Pasta Factory:

“The earth is our mother, a mother that nourishes you, and you have to take care of her.”

Translation of interviews and other language assistance by University of Urbino student Martina De Filippo.

Studying in Urbino has been a once-in-a-lifetime experience. Before the trip, I was most excited about our free weekends, to explore bigger cities in Italy, such as Florence, and Venice. The weekends away were amazing, making sure to see all the big tourist attractions. However, by the end of the weekend, I always was ready to return back to Urbino. Urbino will forever feel like home, even though I have only lived here for a month. This place has shaped me into a better student, and better journalist, and opened my eyes to a whole new cultural perspective. I will forever be grateful for my family, professors, and this city for giving me this wonderful opportunity. I cannot wait to return to the city later in life for aperitivo in the piazza.