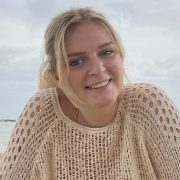 Coming to Urbino was one of the best decisions I…

Viola Gargamelli has been practicing Falconry for as long as she can remember. Here she is with her current Falson, "Furlo".

Furlo is a bird of prey that hunts from very high distances. He is able to see from up above because his eyes are eight times better than human eyes.

Gargamelli uses a glove to hold Furlo. She said that it is more comfortable for him to be on the glove than on her bare arm.

Furlo has been with Gargamelli for five years now. She must look after him everyday, or he could simply fly away.

Here is Gargamelli's journal. In this book she tracks Furlo's weight after every meal. If he is too heavy, he is not able to fly safely.

Gargamelli describes the relationship as a friendship. She is very fond of falcons and plans to have one her entire life.

Viola Gargamelli, at age 21, is in the relationship of a lifetime. It’s a friendship full of give and take, always balancing her awareness that all the time and energy she has put in could be lost in an instant.

This friendship is not with another person, but instead with one of the most noble creatures on earth — a falcon.

The deadly talons rest gently on her bare arm as she walks around her property, at ease with the knowledge that this animal is a bird of prey. While the falcon, Furlo, has the chance to fly away, he chooses day after day to stay by Gargamelli’s side.

She rests her head on her falcon’s head, an embrace that not many would be willing to attempt.

Gargamelli is a trained falconer who has been working on her craft for as long as she can remember.

Falconry is a tradition that can be traced back nearly 4,000 years. This practice was born in the Arabian desert, where Bedouin culture saw falcons as a symbol of nobility and power.

The tradition, once used as a means of gathering food, is now used for sport and art, as was recognized last year when UNESCO added falconry to its list of “Intangible Cultural Heritage” practices.

For Viola Gargamelli, falconry is a way to feel connected to nature.

A Job at Spanish Airports

Gargamelli has been fascinated by nature for as long as she can remember. Her uncle, Maurizio Saltarelli, sparked her love of birds at a young age. Saltarelli was a trained falconer, as well as an avid birdwatcher, and showed his niece, Viola, the demanding ways of a falconer’s relationship with the bird.

In early childhood, she learned from Saltarelli the magical lesson that could’ve come from Peter Pan of Kensington Gardens. He whisked her into a new world and taught her that “the moment you doubt you are flying, you lose the power to fly forever.”

Growing up, Viola moved with her family from Italy to Spain. As an 11-year-old, in a new country, with no friends to turn to, she spent her free time daydreaming about falcons. While reading books and searching the internet to learn all that she could about the art of falconry, she realized that she yearned for a falcon all her own.

After years of hard work and research, at 16, she had finally saved up enough money to buy her first falcon. Like any pet, a falcon is a sizeable expense. In the case of a falcon, one must consider the initial purchase price, training expenses, food, and various pieces of equipment.

At 18, Gargamelli was given what she considered to be the opportunity of a lifetime, working airport security in Spain with her falcon. Falcons are often used at airports to scare pigeons away from landing on runways or congesting pathways. Keeping birds away from airports is a crucial safety aspect that is often not seen by the public.

Gargamelli explained that this job is considered an honor and the application process is demanding. She worked the job for two years, one year at Madrid’s main airport and another at the smaller airport of Girona, in Catalonia.

At these airports, she used the company’s falcons that were specifically trained for airport security. While she thoroughly enjoyed this work, Gargamelli ultimately decided to take her falconry experience in a different direction.

Gargamelli’s “Furlo” is a Harris Hawk. “Furlo” is also the name of a dramatic gorge near her town of Fermignano, a place where the river slices through a natural preserve between two mountains.

To grow her love of falcons even deeper, next month she will be acquiring another falcon.

While she dreams of spending all her time with her falcons, Gargamelli works at a pizzeria in Urbino to financially support her falcons.

She works most days, while carefully balancing her schedule to leave time for Furlo. Gargamelli often stays up late into the night to spend as much time with her falcon as possible.

For many falconers, Renaissance events and festivals are notable ways to share their love of falcons with the world. However, this is not the case for Gargamelli, who gets all the satisfaction she needs by simply spending time with her falcon.

Gargamelli explained that taking care of a falcon is time-consuming. While she compared owning a falcon to owning a dog, she said it is also vastly different.

“If the falcon does not respect you, it can simply fly away,” she said.

It is exceedingly difficult to earn the trust of a falcon due to their independent nature. In the wild they do not travel in a pack, and even when they are trained, they have the capability to trust only one person. If a falconer does not work every day to keep this trusting relationship intact, the falcon can be gone in an instant.

It can be very difficult to do every day, but it is very rewarding.
–Viola Gargamelli, trained falconer living in Fermignano

The training process for a falcon is complicated and can take over a year. Falconers must learn first from an experienced falconer and only then can they begin to train a bird of their own. For Gargamelli, this falconer was her mentor and role model, her uncle.

Once a falcon is around three to four months old, it has the ability to fly and is independent enough to enter falconry training. Falconers must work with a variety of tools to train the falcon to hunt. If they do it correctly, the falcon will not fly away.

To some, this process is strenuous and tiresome, but Gargamelli enjoys the challenge. Their stubborn behavior is what Gargamelli loves most about falcons.

“It can be very difficult to do every day, but it is very rewarding.” The fulfillment that Gargamelli gets from taking care of her falcon keeps her going. Some days the task of feeding, weighing, training, and simply being around the falcon can be a heavy burden, but Gargamelli plans to practice falconry forever.

“The friendship I form with my falcons is something I always want to have in my life.”

Translation of interviews and other language assistance by University of Urbino student Matteo Ridolfi.

Coming to Urbino was one of the best decisions I have made regarding my college experience. The class was very immersive and gave me the opportunity to put my skills to the test in real time. I learned a lot about Italian culture and was given the chance to work with translators. This program pushed me outside my comfort zone and helped me grow as a journalist by interviewing a large variety of people, most of which did not speak English. During my time in Urbino, I drank a lot of crema cafe, ate a lot of pasta, and learned a lot about wine. I will always treasure the memories and the friends that I made in Urbino.