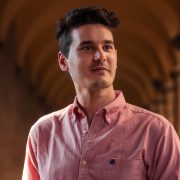 Urbino local Roberto Tempesta, who impersonates Duke Federico da Montefeltro for a variety of official occasions, leads his entourage to a 600th birthday celebration for the duke at the Palazzo Ducale.

In a ceremony at the Duomo, the city welcomes the long-awaited return of the duke's remains.

Following the ceremony at the Duomo, the duke's remains were returned to his original resting place, the Chiesa di San Bernardino, just outside Urbino.

Roberto Tempesta, center, poses with the remains of the man he has impersonated since 2000.

The statues of Urbino's Duomo, Cattedrale di Santa Maria Assunta, look out into the fading day as crowds assemble beneath for the duke's birthday.

Tempesta (center) and his Battista Sforza pose with pianist Bruno Canino after a magnificent performance.

Tempesta poses with fellow members of the Associazione Rievocazioni Storiche, the organization that handles all historical reenactment in Urbino.

Roberto Tempesta looks through photos of himself and his father impersonating Duke Federico, all the way back to 1982.

Celebrating the patron duke’s 6th centennial, Urbino honors its history with reverence. But does the “ideal relationship” between Federico da Montefeltro and his Città Ideale stand the test of time?

URBINO, Italy – Crickets serenade a summer evening in the city. Crowds shuffle up Via Vittorio Veneto to the Palazzo Ducale. Locals and tourists alike buzz with muffled excitement as they gather beside the Duomo, expecting a special guest.

This is a birthday celebration. Everyone is dressed up for a revered old friend of the city. Before long, the chattering stops and heads turn toward the street, where a mighty procession from a different age, complete with an orchestra, introduces the guest.

Splendid in a Renaissance gown, Federico da Montefeltro, Duke of Urbino, strolls into his palace to celebrate his 600th birthday.

June 7th, 2022, marks the beginning of a full year of celebration in Duke Federico’s honor that the city has made much effort preparing for. It is now six centuries since the birth of Urbino’s most successful duke, the one who placed the city on the bleeding edge of the Renaissance. His revolutionary ways live on in many facets of Urbino today, while for others one has to look more closely.

The celebration on the evening of the birthday is fit for a noble. In front of a piano stage in the courtyard of the Palazzo Ducale, the crowds sit in orderly rows. To one side, as if transported from another time, sit the duke, his wife, and their entourage. Together they enjoy the magnificent music of Maestro Bruno Canino, a Neapolitan virtuoso who has travelled here for this special occasion.

Needless to say, it is not the original royal family enjoying Canino’s performance tonight, but devoted actors. The night before, the city ceremonially welcomed the return of the duke’s physical remains, after a 22-year stay in Pisa where a team of paleopathologists studied them to confirm details about Montefeltro’s habits and features. As to the duke in the audience, how does he maintain such stalwart composure as Montefeltro while facing what is shaping up to be one long year of impersonation?

“My duty compels me,” Roberto Tempesta says, gesturing energetically. “So, the persona takes over.” By day, Tempesta works in a glassblowing workshop and in the Protezione Civile (Italy’s civil protection service) on his motorbike. On his “off time” he embodies the living spirit of Federico da Montefeltro. It is difficult to believe that this animated man who struggles not to fidget and gesticulate during an interview has made a career of portraying the duke, known for his patience and restraint. Tempesta eagerly opens the door to a dimly lit apartment where he stores his costume, the place musty with the pastoral smells of an old wooden lodge, and digs into some photo archives.

“My father started the acting job in 1982,” he says, pointing at black and white photos, “and in 2000 I took over.” Tempesta’s father, Sergio, founded the Associazione Rievocazioni Storiche, the organization that now oversees all historical reenactment work in Urbino. Thanks to this coordinated effort, the duke still walks the streets of Urbino for festive occasions. Tempesta regularly attends important ceremonial gatherings, a duty that doesn’t weigh on him. On the contrary, it is a dream come true.

“They used to call me Duca Jr. before all of this started!” he says. While Sergio Tempesta was the duke, he owned an electrical appliance store and shared a fascination with ham radio with his son. The younger Tempesta adopted the handle “Duca Jr.” for his radio station. Ever since, the man has embraced the title for all aspects of life, including his social media accounts.

For the uninitiated, such reverence for a figure in the past may seem overboard. Having an actor portray him nearly every week? Dedicating an entire year to birthday celebrations?

The breakthroughs in thinking that Duke Federico da Montefeltro spawned sent ripples throughout Europe, which are felt to this day.

“We need to understand what happened here was copied, imitated. People from around the world came here to personally check why Urbino was so famous for its modernity.” She taps on the tabletop during an interview at a cafe.

Under the benevolent rule of humanist-educated Federico da Montefeltro, Urbino saw decades of peace, which was far from the norm in the late 1400s. The duke had a novel approach to government, promoting education for women as well as men, and supporting religious freedom and the arts. His wife, Battista Sforza, was equally instrumental in turning Urbino into an early Renaissance oasis.

“He gained the money with state-of-the-art mercenary tactics, while she spent it to bring wellness to all citizens,” Bedini points out as she plays with her coral necklace. In the years of prosperity that Urbino enjoyed under Montefeltro its population exploded. The university taught a fusion of humanities and sciences, spawning advances in philosophical thought. The likes of Piero della Francesca, Francesco di Giorgio Martini, and Giovanni and Raffaello Santi produced renowned works of art, mathematics, and architecture.

Urbino feels eternally indebted to this “gentleman” of early modern Europe, Bedini says. The breakthroughs in thinking this city spawned sent ripples throughout Europe, which are felt to this day. So how much of the incredible leap from six centuries ago lingers here today, in the everyday student at Carlo Bo? Bedini’s smile peters out.

“Today, we have separated humanitarian and scientific studies, as if they couldn’t work together.” Her grimace tightens as she delivers the grim observation. “This is a great mistake of our period.” Bedini feels it is very dangerous to study only one aspect of this essential dichotomy and fears the modern world suffers from the absence of philosophy in its curriculum. The reason Urbino today no longer shines the way it once did, she thinks, is people’s inability to appreciate things beyond their grasp. The lack of empathy within this society bound by a pursuit of money, she believes, severs people’s aspirations from their ability to appreciate them.

Something about these modernist woes does not add up, though. Officially, Bedini is an administrator at the University of Urbino Carlo Bo, yet here she is delivering profound historical analyses, which often intrigue full-time historical researchers. Across the city, Tempesta, a glassworker and civil servant, prepares his alter ego for another night in the ducal court.

In a town where the essence of the great humanist Montefeltro becomes harder to define every passing year, innovators like these keep it alive. Both Bedini and Tempesta, in their own ways, demonstrate the ideal relationship Urbino aspires to with its beloved duke.

Translation of interviews and other language assistance by University of Urbino student Iliara Caiazzo.

Nothing I’ve experienced and no place I’ve been to so far touched me quite like the time I spent in Urbino. These few weeks of exploration coupled with mentorship from industry professionals helped me gain remarkable insight into the work and life of a foreign reporter. I honed my skills as a writer, photographer and videographer, and I got to hear fascinating stories from locals with the help of our incredible translators. Out here amidst the paved streets, where the fragrance of delicious regional cuisine mixes in the air with lively chatter from all directions, storytelling comes to you naturally. Urbino offers something novel for any aspiring journalist with a curiosity for the historical, cultural or culinary – all it takes are a few words of Italian and an adventurous spirit. I will treasure the experience I gained and the memories I made with my sources and colleagues, and heartfully recommend this program. Ci vediamo, Urbino!