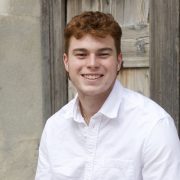 My experience in Urbino has been one unlike any before.…

Stanislav and the Ukrainian students have Italian class twice a week to try and acclimate themselves with the Italian city.

Stanislav (left), Kiril, and Olga take advantage of the food offered at the cafeteria despite the repetiveness of some items, " I'm a bit tired of the pasta and pizza," said Stanislav.

Dima (left) and Ksenia take part in the night life in Urbino, it helps "distract themself," from the situation going on in their home lands said Ksenia

Ukrainian Students, (from left to right) Ksenia, Mirina, Kristina, and Diana catch up while on break from their Italian lessons

Ksenia, Stanislava, and Marina (From left to right) walk from their dorms. They are a support system for each other in this foreign country far from home

The University of Urbino is a refuge they hope is temporary

URBINO, Italy – For the past month 19-year-old Ukrainian student Stanislava has been waking up to a peaceful view of the cathedral in this famous Renaissance city in the mountains of Marche in central Italy.

That wasn’t the case on Feb. 24 in her hometown of Kharkiv.

That morning Stanislava was jolted awake by the deafening sounds of explosions and gunfire filling the streets. Her bedroom windows were being pelted with shrapnel.

As the early morning sky was illuminated by fiery explosions, uncertainty laid ahead for all Ukrainians who would soon be met with the life-changing consequences that accompany war.

Russia’s invasion of Ukraine has destroyed cities, taken lives, and torn families apart. All ages have experienced what had been the unimaginable effects of war.

But 15 Ukrainian college students were fortunate enough to find temporary residence at the University of Urbino located inside the 15th-century walls of this city. They are among the 100,000 Ukrainians who have entered Italy since the war began, according to the Italian Ministry of Interior, part of the estimated 12.8 million of their fellow citizens displaced from their homes, according to the United Nations.

The Ukrainian students were able to resume their education in Urbino. For some it was a choice to continue classes in a safer place. But a few had no choice because they no longer had homes.

One of those was Stanislava, one of several Ukrainian students who asked their last names not be used for fear of reprisals by Russian forces.  Her childhood home in the heavily bombed Kharkiv was taken from her by Russian bombs. What was once a vibrant city is now littered with the remains of buildings decimated by the Russian army and air force.

“I don’t know what my home is anymore,” said Stanislava.

Stanislava also worried about her father who serves in the Ukrainian military. She remains in contact with him but for security reasons doesn’t know where he is located.

[The Russians] wouldn’t let anyone leave or enter. Air raid sirens can be heard 2-3 times a day and gunshots all day.”

Being disconnected from family and the familiar streets they grew up in is another challenge for these students.

“I miss my family, my friends, and my city, because my city is very beautiful,” said Stanislava.

Stanislav Sakhnyuk, 19, had a similarly perilous retreat from Ukraine. He was forced from his hometown of Sumy in the northeastern part of Ukraine by the arrival of Russian soldiers.

“[The Russians] wouldn’t let anyone leave or enter,” he recalled. “Air raid sirens can be heard 2-3 times a day and gunshots all day.”

Stanislav and his mother were able to escape Sumy thanks to an agreement between Ukrainian and Russian forces that allowed the passage of civilians out of the city in return for the release of captured Russian soldiers. Although the Ukraine government has ruled all men between 18 and 60 must serve in the armed forces, Stanislav said he was allowed to leave because he had been accepted to study in Urbino.

But the challenge wasn’t over for Stanislav. It took six attempts and some generous Ukrainian soldiers to accept his Erasmus papers, which were displaying that he had registered to partake in a university program outside of the country and allow Stanislav to flee to his new studies in Urbino.

The university has allowed the Ukrainians to stay in its dorms. They continue their courses through online classes from their Ukrainian universities, but they face challenges.

“The most difficult part about being here is the language,” said 18-year-old Ksenia, who came from the seaport town of Odessa.

While the language barrier is challenging, the Ukrainians feel welcomed in the Italian city.

The greatest difficulties lie outside the classroom, where there is no escaping the war back home. Pictures and videos sent to them from relatives back home remind them that there is still fighting in their beloved land.  There is a constant worry of family, and the air raid sirens still ring in their heads.

Amid the uncertainty, there is hope. Separated from their families, the Ukrainians have each other as a support system. They may have escaped the war-torn areas physically but for them and their country, there is no escaping what they call a devastation that resides in their hearts.

“People try to move on with their lives,” Ksenia said, “but it’s impossible.”

“99,788 people fleeing the conflict in Ukraine have arrived in Italy so far, of which 95,244 at the border and 4,544 controlled by the Friuli Venezia Giulia railway police department,” the statement of the Ministry reads.”

My experience in Urbino has been one unlike any before. Not only was I able to fully immerse myself within the Italian culture, but thanks to my story was able to take a glimpse into Ukrainian life as well. Getting to know the Ukrainian students will be something that I remember and cherish forever. Developing a story in another country with 2 or 3 different languages being thrown at you, was a challenging experience but one that I would never trade. I can thank my mentors as well as Urbino for pushing me out of my comfort zone and forcing me to fully admire the beauty in each aspect of a story. The experiences in Urbino have given me a deep appreciation for photography and provided me with a different view on how to capture not only a person but their culture and their story. I am confident and excited for my next endeavors in the world of Journalism and can thank Urbino and the wonderful people I’ve met for that.