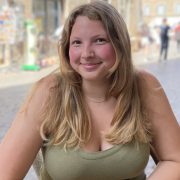 People say you grow the most when you are uncomfortable…

Daria breaks down as Yana (14) describes the rocket attacks.

A traditional Ukrainian meal being served for lunch.

Lucia Kurchak, Natalia’s mother, has lived in Italy for 21 years and works as a caregiver for the elderly.

Yana chats with her friends over messanger apps and social media for two hours a day.

A photo taken July 22, 2021 of the family in Ukraine with their dogs Berik and Jesse.

Natalia and Daria looking through their old photos from home.

Daria shows the warning texts she recieves everytime there is an air raid in Ukraine.

Natalia and Daria discuss as they prepare lunch.

Artwork by Vadym that says "No War. I Am For Peace."

Julian cuddles with Natalia in their entryway after he wakes up from a nap.

Natalia gets emotional as Daria watches Facebook videos of the current state of Ukraine.

FERMIGNANO, Italy- Three young boys sit on a couch, eyes locked on their tablet, where the cartoon playing causes them to giggle.

But just a few feet away, their mothers, who are sisters-in-law, are sharing a different emotion. Tears stream down their faces, their hands are shaking. They sob quietly as they recount the brutality and horrors of the Russian invasion that made them leave their husbands behind and flee their Ukrainian homes.

Their heartbreak is palpable.

“The Russians want to take the Ukrainians away from the world,” Daria Marukhniak said between the sobs. “And we don’t understand why. They are destroying us. They destroy churches and hospitals and schools and museums. Everything.”

“The Russians come with tractors and scrape all the earth and the bodies together,” Natalia Kurchak added tearfully.

On March 7, Daria and Natalia arrived in Italy after a two-day journey from their home in Lviv in western Ukraine to escape the bloody, violent attacks of the Russians. They left with Daria’s daughter Yana, 14, and son Markian, 12, and Natalia’s sons Vadym, 10, and Julian, 5.

Their story is not unusual. Since the invasion began February 24th, some 6.6 million Ukrainians, mostly women and children, have sought refuge in other countries. A week into the war, Italy declared its support for refugees and has since welcomed over 118,000 Ukrainians.

I’ve never seen so many people, So many buses and cars and people on foot. There were babies. Children who could barely walk. And it was cold, very cold.

Italy was the natural choice for this group because Natalia’s mother, Lucia Kurchak, has been here since 2001, working as a caregiver for the elderly.

On March 5, the two women and four children boarded a bus jammed with 50 people, and dogs, cats, and hamsters. Though their home city is only 43 miles from Poland, the line to exit was 30 miles long and took 15 hours to clear.

“I’ve never seen so many people,” Natalia said. “So many buses and cars and people on foot. There were babies. Children who could barely walk. And it was cold, very cold.”

The family stayed on the bus for another day as it traveled through Slovakia, Hungary, and Slovenia before crossing into Italy. Lucia picked them up in Cattolica, a small town on the Adriatic coast, and 33 miles later, they were in their new home.

Fermignano, with a population of 8,500, is in the Le Marche region of eastern Italy. Daria and Natalia’s families live there in a four-room house, the cost of rent and utilities paid for by financial support organizations and the Italian government.

Now safe in Fermignano, the mothers prioritize providing their children with a sense of normalcy with books, art, toys, and games. They prepare traditional Ukrainian foods such as borscht (a stew-like dish with a beet base and vegetables, meat, and cream), salo (cold pork fat with garlic served on bread), and vareniki (potato dumplings eaten with oil, meat, and cream).

A big adjustment for the mothers and children has been learning Italian. But the family says their Italian neighbors have been generous and welcoming.

“The people here have been very friendly and helpful,” Yana said. “They bring us milk, chicken, bread, supplies. Very kind.”

The children were invited to attend the local schools but didn’t want to have to adjust to a new language, teachers, peers, and curriculum.

Instead, they have been able to take online classes with their old teachers to keep up with their Ukrainian studies.

“I really like online school,” Yana said. “We stay together. It was too much stress to try to go to school here. I said, ‘I want to do school online,’ not in a school.”

Now that school is over for the summer, the three younger children are going to a camp that is offered for free to Ukrainian refugees. There they will learn Italian and English, go swimming, hiking in forests, and play sports.

All four children like to ride bikes, kick around a soccer ball, do jigsaw puzzles, play board games, and take care of their landlord’s pet turtle, Ibiza. Even with these activities, they are still missing out on a lot of their favorite things from home.

“I like to play chess,” Markian said. “I got a trophy and a medal. I enjoy it very much.” He played with a chess team back home but has yet to find a team in Fermignano.

Vadym has been practicing karate for four years. He had a tournament scheduled for the week after they had to leave Ukraine. Luckily, there is a karate studio in Fermignano, and Vadym has just received his green belt, one step below the prized black belt.

In the last two weeks, Julian, the youngest, has started riding his bike without training wheels and is very excited to be able to keep up with the bigger kids. He also likes to cuddle with his mom and watch Ukrainian-dubbed SpongeBob SquarePants with Vadym and Markian.

As the oldest child in the family, 14-year-old Yana has stepped into a more adult role and is staying home with the moms to help around the house and with cooking, which is one of her favorite activities. She also helps by keeping the boys happy and entertained.

Yana still finds time for her own hobbies. She said she enjoys painting, drawing, and reading.

But even with all the efforts to pass the time and stay optimistic, it is extremely difficult for the family to be away from home, especially with how abruptly they had to leave and how much uncertainty still fills their minds.

“I like Italy,” Yana said. “I like going to the beach with my grandmother. But I miss my dad.”

The women wish they could tell the children when they can go home and see their fathers, homes, families, and pets, but there is no telling what their future holds.

“It is such a dangerous place,” Natalia said, as Daria tried to slow her tears and catch her breath. “Catastrophic. Our friend’s town in the East is completely occupied by Russians. People can’t recover the bodies of their loved ones.”

Natalia said she understands why her parents and grandparents would cry when talking about the second world war, when the Nazis invaded Ukraine. Her mother, Lucia, compared the Ukrainian War to World War II.

Many of the family’s friends and relatives are still in Ukraine, including elderly people and young children. All Ukrainian men ages 18-60 were sent to work for the armed forces, including the women’s husbands.

During the first couple of months, they were in contact a lot with their husbands and others in Ukraine through social media apps like Facebook, WhatsApp, Telegram, and Viber. But recently, their phones have been quieter, though they often receive texts warning that there is a threat of an air raid.

At first, there was hope they could all go back by the middle of May. But now, it looks like the war will last longer.

The air raid warning texts are horrible to receive, but also a reminder that the six of them are in a safer place. Italy has welcomed and supported them in many ways, yet they still look forward to the day when Ukraine is a safe place to raise their children.

“We want to return, but we need peace,” Daria said. “How can children learn and live to the sound of sirens? And always being afraid? When there is always a threat of a missile arrival? Unfortunately, we have no plans for the future. Only hope for peace.”

People say you grow the most when you are uncomfortable and I have definitely found that to be true throughout my time studying abroad in Italy. Spending time in a new country with people I've never met, in a different and non-English speaking culture has really pushed me out of my comfort zone, but I have grown in so many unimaginable ways. From struggling to get past language barriers, running after trains, searching for the best crema caffè in the country, and eating at least one cone of gelato a day, I've had so many experiences and made memories that will last a lifetime. I have fallen in love with the city of Urbino and its friendly people, amazing food, and beautiful views. I am so grateful for this opportunity to learn about myself, improve my journalism skills, and discover the culture and history of Italy.