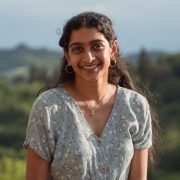 When I secured this opportunity to study abroad, I knew…

No More “Business as Usual”

Tartufi Antiche Bontà, a shop and restaurant in Urbino, offers a culinary experience centered around the truffle, a prized delicacy in the Marche region of Italy. Owner Monia Costantini supplies her business with truffles from her farm in Acqualagna.

Costantini devotes significant care and attention to her work to create a positive experience for her customers.

In contrast to her concentration in the kitchen, Costantini visibly relaxes while mingling with friends and patrons.

Alongside packaged products, Costantini sells truffles fresh from her farm. Lorenzo Tempesta (left) is not only a frequent customer but also the lawyer for Tartufi Antiche Bontà.

On slow business days, Costantini can be found sharing a glass of wine with friends who stop by for a visit.

Martinelli (right) grew up with Tartufi Antiche Bontà, which Costantini opened when Martinelli was 10. The 24-year-old now helps his mom with the business.

URBINO, Italy — A distinct earthy aroma wafts through the restaurant. Though city pigeons and roaring motorbikes roam outside, the scent seems to come from the depths of a wilderness untouched by humans — a fragrance akin to soil, wood, and foliage.

Monia Costantini unfurls a cloth bag, revealing the source of the scent: black truffles. She touches one of the dark, grooved lumps to her nose and inhales deeply. Satisfied, she picks up a metal slicer and carefully shaves the truffle, hunching her shoulders to get the right angle. Each glide across the blade is delicate and meticulous, like setting stones in jewelry.

The care and effort that Costantini puts into each dish she prepares reflects the care and effort she puts into her business, Tartufi Antiche Bontà, a truffle-centric shop and restaurant in the heart of Urbino. In an industry full of men, Costantini has fought hard to fulfill her vision for the establishment, which she considers her “third son.”

Costantini may not work with jewelry, but the truffle is still very much like a gem. The underground fungus is a prized culinary delicacy that grows in few places around the world. It is a hallmark of the Marche region in Italy.

Usually, “hunters” must forage for truffles in the woods, using dogs to sniff out the buried treasure. However, 15 to 20 years ago, the Marche region offered payments to residents willing to experiment with farming truffles.

“It was an experiment because they weren’t sure at the time if truffles can actually be cultivated,” Costantini says through a translator. “My dad had some hectares of land, and he asked himself, ‘Why don’t we try?’”

That experiment grew into what is now eight hectares of a truffle farm that Costantini owns in nearby Acqualagna. Every truffle at Tartufi Antiche Bontà comes from that farm.

Though her farm is in Acqualagna, Costantini chose to open her business in Urbino 14 years ago because very few people in the city specialized in truffles at the time. This holds true even today, according to Egidio Cecchini, the director of shopkeepers, restaurants, and hotels in Urbino and its surroundings.

Cecchini strolls into the restaurant on a slow evening. Mellow jazz floats in the air. A soft gurgling joins the symphony as Costantini heats up a truffle cream sauce for crostini con vellutata e scaglie di tartufo fresco (crostini with cream and fresh truffle flakes).

“In Urbino, this is the only restaurant shop where truffle is the icon, the most important food identifying the character of the restaurant and of the shop,” Cecchini says.

The lamps cast a dim amber glow on bottles of wine lined against the back wall. Shadows dance across Costantini’s face as she grabs a bottle to share with Cecchini. Their relaxed smiles and lively conversation brighten the dimly lit restaurant.

“The male-dominated truffle business is not easy, says Monia Costantini: “You have to be a woman with a man’s personality, with the determination most of all.”

Cecchini has worked with Costantini for nearly 15 years. Though business brought the two together, friendship also bonds them.

“She (Costantini) is courageous, and she has fantasy,” Cecchini says in English. “She was able to think a place different from any other you can find in Urbino and that has an own identity, and this is its force, its strength, her strength.”

Costantini did not always receive such high praise. When she opened Tartufi Antiche Bontà in 2008, many naysayers predicted that she would have to close within a couple of years. They did not think a 30-year-old woman could survive in the industry.

“In the truffle world, most of the workers are men,” Costantini says. “The hunters are men. You’re a woman, and you work with hunter men, and they dismiss you and your work.”

Though Costantini has her own truffle farm, she must work with hunters to collect enough truffles to sell when festivals roll around in the fall.

“It’s not easy because you have to be a woman with a man’s personality, with the determination most of all,” Costantini says. “Because when you go to the truffle hunters, and you are a young woman of 30, and they are older, if they see you as naïve and inexperienced, then they try to overstep you.”

Costantini recalls some of the ways truffle hunters have tried to fool her, assuming she does not know any better. Some put broken truffles back together using toothpicks and tried to sell them to her as whole. Costantini explains that a broken truffle that costs 200 euros would cost 1,000 euros if it was whole, so buyers risk wasting a lot of money if they do not know how to analyze truffles.

In another instance, a hunter tried to sell Costantini a bag of truffles with a kilogram of soil in it. The weight of truffles determines their value, so if Costantini had not been discerning, she would have wasted her money on dirt.

“You have to make them (truffle hunters) understand that you know how to do this job, and you can do it as well as someone else could do it,” Costantini says. “It’s you who has to make them understand the person you are and the determination you put in the job you’re doing.”

Over the years, Costantini has done exactly that. She learned which truffle hunters she could trust and earned their respect.

One such hunter is Giorgio Remedia, 66, who has known Costantini since she worked as an assistant at a truffle shop in Acqualagna. Remedia recognized early on that Costantini is “brilliant” and “dynamic,” so he partnered with her when she opened Tartufi Antiche Bontà.

“You have to be good at selling truffles before they deteriorate because it’s a product that has great value, economically speaking,” Remedia says through a translator. “Whoever sells truffles has to be professional, serious, credible, and prepared. Monia has all these characteristics.”

Costantini’s capabilities are clear to one person who has seen it all: her eldest son. Simone Martinelli, 24, has gone from running around Tartufi Antiche Bontà as a child to now working there alongside his mother.

Although Costantini derives great satisfaction from her business, this dedication requires sacrifice. The time she spends on the business equates to less time with family and friends.

Costantini says she struggles with the fear of not being the mom she wants to be because she spends so much time at the shop rather than at home: “One time, this old man came to the shop and told me, ‘Remember, Monia, that during life you have to make choices, and if you want to do something good, mom and entrepreneur don’t go well together. Either you do well as a mom or as an entrepreneur.’”

Tears gloss her eyes. She blots them away with a paper towel, smudging her mascara.

“I call the business my third son,” Costantini says. “In reality, it’s the first one because I’m always in the shop.”

From Martinelli’s perspective, Costantini spent plenty of time with him while he was growing up. He got to see her every day, whether it was at home or at the shop. Martinelli says that the situation might have been stressful for Costantini, but it was never stressful for him.

Despite the sacrifices, Costantini recognizes the value of what she has built. In fact, it is the very challenges she has faced that make her proud.

“I get a lot from this job, but I’ve lost a lot. I didn’t go out with my friends, but also on a family level, because I was here (at the shop) for all the holidays except Easter and Christmas,” Costantini says.

She pauses, contemplative. Then, with a small smile: “But everything that you lost, you have received it from your business.”

When I secured this opportunity to study abroad, I knew I was in for the experience of a lifetime, one I had dreamed about for seven years. Urbino’s magic was palpable from the moment I saw its walls, and it didn’t fade for a single second I was here. But I never could have anticipated that this relatively obscure Italian city would feel like a second home to me. A part of my heart will remain in Urbino forever, but I sense that it has always been there. Though there is much to say of Urbino’s beauty and history (and gelato, night life, shops, etc.), nothing was more special than the people I met. They never stopped surprising me with their kindness, generosity, and love. Thank you to Susan West and Susan Biddle for being my biggest cheerleaders, Caffè Basili for housing me day and night, the translators for helping me survive (especially my soul sister Ilaria), everyone at Tartufi Antiche Bontà for their endless hospitality, and all the other extraordinary individuals who supported me mentally, emotionally, and physically — even if you didn’t realize it. It is the ultimate honor to call you all my friends.

Live Like the Bees: A Self-Sustaining Farm Feels the Impacts of Climate Change

No More “Business as Usual”