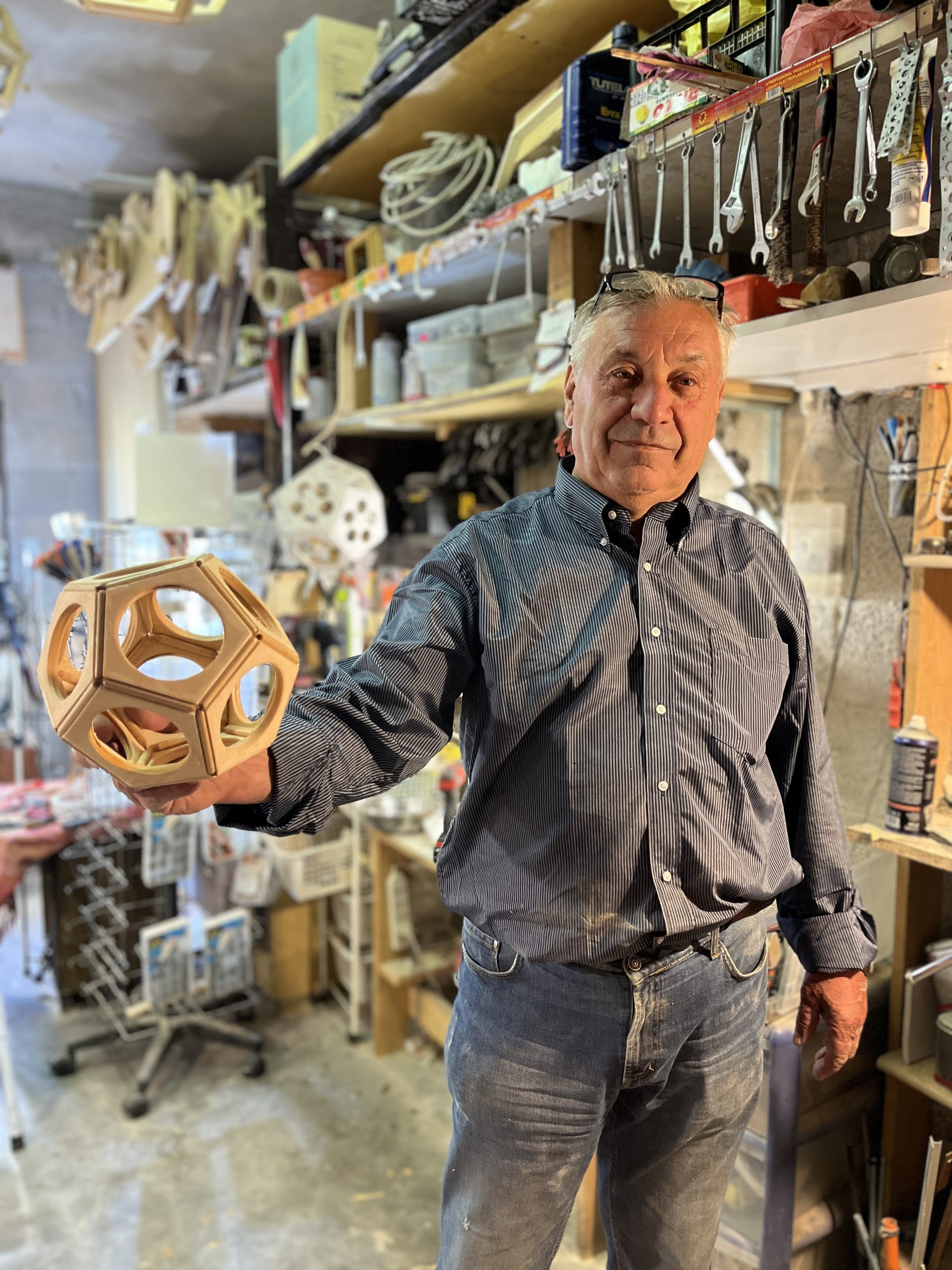 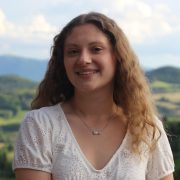 Here we studied journalism, photography, and videography. As a student…

The workshop of Fernando Rusciadelli. Here, he builds sculptures of the original designs of Leonardo da Vinci.

The saw Rusciadelli uses to cut the wood for his sculptures.

Fernando Rusicadelli holding the book that da Vinci's sketches are in.

Scrap wood pieces from the sculptures litter the floor of his workshop.

Rusciadelli drilling a piece of wood for the sculpture.

Opening one of his sculptures to show the mathematical aspect.

One of of the more difficult sculptures he made.

Details from the inside of the wheel sculpture.

Some of the smaller sculptures Rusicadelli has made.

One of his favorites.

Tools used in his shop for sculpting.

Rusciadelli and the final product of the sculpture he was building.

URBINO, Italy – Fernando Rusciadelli scrapes wood shavings into the air as he works on another beautiful structure that is his hobby since retirement – polyhedra connecting with the Italian Renaissance of Leonardo da Vinci.

Renaissance art was not just about human figures in paint and marble. Underneath that “art” was often a new science – of mathematics. Pietro della Francesco, known for his portraits of the Duke and Duchess of Urbino, was also a mathematician. The Duke’s son was tutored by mathematician Luca Pacioli, a Franciscan friar who also taught Leonardo da Vinci mathematics. There is much history in this small town, and Rusciadelli finds himself in a unique place to reconstruct these mathematical pieces of art.

Today, Rusciadelli does not call himself an “artist,” or his work “art,” as he constructs elegant wood reproductions of the polyhedra that da Vinci drew for Pacioli’s book.

“Sculptures are part of the history in Italy,” he says, speaking Italian through a translator. “But it’s not inspiration I look for. It’s the scientific and mathematical centuries-old discoveries that exist within the sculptures.”

Artwork can come in many forms, but the significance of both math and science during the 15th century is more important to him than the creations themselves.

The divine proportion of Pacioli’s book title is the “golden ratio” that represents 1 plus an irrational number divided by 2. Specifically, (1 + √5)/2. This proportion is famously expressed in da Vinci’s sketch of man drawn in a circle, standing upright, his body spread out.

The designs in the Pacioli book are specifically focused on polyhedra, three-dimensional shapes with an orderly pattern of regular polygons joining each vertex. Da Vinci made four versions of Pacioli’s polyhedra: Planar (only faces are shown), Vacuous (only edges are shown), and two Stellar (pyramids drawn on each figure).

Rusciadelli turns these illustrations into tactile objects of unvarnished wood.

Born and raised in Urbino, Rusciadelli retired from being a factory manager. After a bad experience with his health, he now busies himself working on his polyhedron sculptures. This has been his hobby for about 10 years. He lives outside the walls of Urbino with his wife, son, daughter-in-law, and two grandsons. As a family man, he dedicates his life to making the best of his environment and its history.

He does not sell any of his work, but donates it to the town of Urbino.

‘Silicon Valley of the Renaissance’

The Oratorio di San Giovanni Battista is a chapel tucked away amid ancient alleyways on a slope in Urbino. Tourists find their way there to admire, behind a modern façade, its early 15th century murals depicting the life of John the Baptist.

The people needed to know something about math in order to build things. The mathematicians of the time showed them how painters can become intellectuals, too.
– Francesco Raghi, volunteer from San Giovanni Battista Confraternity

Francesco Raghi is a brother of the San Giovanni Battista Confraternity at this chapel who welcomes visitors by explaining the historical context and artistic aspects of the Oratorio.

Science and math were slow to develop in the Middle Ages under the Roman Catholic church. But the Renaissance brought a flowering of math and science, as well as art, Raghi says.

“The people needed to know something about math in order to build things,” he says through a translator. “The mathematicians of the time showed them how painters can become intellectuals, too.” He is looking at Rusciadelli’s wooden creations in a cave-like room attached to the Oratorio.

“Through these sculptures,” Raghi says, “it creates both a scientific and artistic point of view.”

In the 1500s, an Urbino native named Federico Commandino translated ancient mathematical texts from Greek and Arabic into Latin and Italian. He was a humanist, incorporating empirical facts to connect knowledge to humanity. His aim was to spread knowledge to everyone, those who could read, and those who couldn’t.

Commandino printed his own books, which had not been done by writers since Gutenburg invented the moveable-type printing press a century earlier. His printing press was just outside of the Oratorio. His texts were studied by many in Europe for almost two centuries.

Raghi compares Commandino’s work to that of Steve Jobs and Bill Gates, and the tiny street that ends with the Oratorio, Via Barocci, the “Silicon Valley” of the Renaissance. Commandino, like Jobs and Gates, used math and science together to create new ideas. The computer, he says, is a form of art that we use in everyday life, even if we don’t understand the technology behind it.

Raghi and Rusciadelli worked together to set up an exhibit of his polyhedra that opened in May. Rusciadelli’s work has been shown here about three times a year for the last six years.

The current exhibit features many sculptures ranging from the Planar to Stellar.

“I have learned many things throughout my time building these sculptures,” he says.

“Patience and self control are the most important, because it means you must never stop working your brain,” Rusciadelli says. “That is something I have come to appreciate as I grow older.”

Translation of interviews and other language assistance by University of Urbino student Mariateresa Chiovotti.

Here we studied journalism, photography, and videography. As a student aspiring to go into the artistic field, coming to Urbino was one of the best experiences I have ever had. Before the program, I had never heard of this town. Little did I know, it would be life-changing. I made lifelong friends, connections, and was given opportunities only one can find abroad. This town is filled with wonderful people, and breathtaking scenery. Living here for only 4 weeks felt like a dream, and I could not wait to share my experience with my family and friends. I want to thank the amazing people who helped me along the way, and those who ran the program. Truly grateful for this opportunity. Grazié mille!