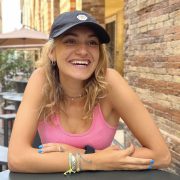 Ever since I was little reading and learning about Roman…

One of the cooks starts preparing the crescia by first rolling it out in the Ristorante pizzeria ragno d’oro Urbino.

The crescia is placed in a small oven to heat it, giving it texture and slight warmth.

The crescia can then be packaged, as the La Baciocca crescia is seen here in Raffaello Degusteria, a specialty grocery store owned by Valentino Gostoli, where people buy it and use it to make sandwiches.

Lara Amadori, owner of La Baciocca lab shows us how Crescia can also be stored in small thin packages in glass containers that they keep their in their lab.

The meat slicer at Camera a Sud cuts the meat into strips to be placed on the crescia.

Here are Stefania Bergami, left, and Maria Guglieomi, working in the Risotrante pizzeria ragno d’oro Urbino putting together the meat slices and cheese to go into the crescia to make a delicious sandwich.

This is the final product of a typical crescia sandwich with vegetables, meat and cheese.

Gigi Andreoli, owner of Camera a Sud serves the final creation of the crescia to some of his friends.

Gigi’s friend's, Cesarini Marcello and Serafini Luana, employees at the Conad enjoy the crescia as they look over the streets of Urbino.

URBINO, Italy—Lara Amadori remembers her nine-year-old self sitting in a warm kitchen on a cold winter afternoon. She contentedly watched her Grandma Irene working hard to make several dishes, including her special crescia sfogliata. A thin, flaky Italian flatbread typically used to make sandwiches, crescia takes a lot of time and effort. But for Grandma Irene it was the perfect opportunity to share her love for cooking with her granddaughter.

Little Lara watched her grandma heat the crescia in the terracotta pan over glowing embers as the buttery perfume spread throughout the room and beyond. She listened in rapt attention as her grandma explained the recipe that has been passed down through their family, how to combine the superfine flour, water, pure pork lard, fresh pasteurized eggs, fresh whole milk, pepper, and the sweet natural sea salt taken from the Cervia salt pan in a small nearby town on the Adriatic coast.

Fast forward to present day, June 2022, at a small shop a few minutes outside Urbino. The warm kitchen is gone, replaced by the stainless steel of an artisanal workshop as Amadori, now 48, has taken over from her grandmother and continues to work hands-on creating her own crescia under the brand name La Baciocca. Today, La Baciocca crescia is sought after for its fresh ingredients and exceptional quality by customers and proprietors of classic and quaint restaurants and quality grocery stores all over Urbino. What has not changed is the recipe from all those years ago.

In 1903, Italian poet Giovanni Pascoli wrote a letter to a friend about Urbino, expressing a longing for the crescia made by a woman at an inn whom he nicknamed “La Baciocca.”

The story of the La Baciocca crescia really began in 1890 at an inn in Urbino run by Amadori’s great-grandparents. They served crescia sfogliata at the inn, and they taught their daughter Irene the special recipe. In 1903, Italian poet Giovanni Pascoli wrote a letter to a friend about Urbino, expressing a longing for the crescia made by a woman at an inn whom he nicknamed “La Baciocca.” Amadori said she believes that Grandma Irene’s recipe would have been similar to the recipe in use in 1890. That is why she and her husband, Giuseppe Baldelli, 57, choose La Baciocca as the name of their crescia brand when they started their business in 2014.

Amadori and Baldelli run La Baciocca with the help of four employees. Sillicia*, Simonetta, and Adriana help Amadori in the kitchen while Marco oversees deliveries. Baldelli runs the business side of the lab. Amadori deals with production. She talks about how she is never bored and likes to feel the dough with her hands. “You change the hand, you change the product,” she said.

Amadori and Baldelli refer to their place as an artisanal lab because they do almost everything by hand and only use fresh ingredients. “Our crescia is the best,” said Baldelli. When they are not working in the lab, they go to food festivals presented by different regions of Italy showcasing their best crescia. In April they attended ViniItaly in Verona, where only businesses known for having the best quality of food are invited. Since 2014 La Baciocca’s business has remained consistent, with Amadori focusing more on fulfilling the needs of select clientele, selling to local grocery stores and restaurants in Urbino. However, with the war in Ukraine, prices have gone up on ingredients. Amadori and Baldelli say they have had to raise their own prices, which has stressed their business. But they continue to maintain the consistent quality of their famous crescia to satisfy their customer’s needs.

Delivered by Marco, the La Baciocca crescia can be found in grocery stores such as the Coop and specialty stores like Raffaello Degusteria. The Raffaello Degusteria, run by Valentino Gostoli and Alberto Crinella, has been around for 15 years. When asked how often people buy La Baciocca compared with other brands, Gostoli replied, “It depends…but if they want better quality, they choose the La Baciocca one.” Gostoli said he started selling La Baciocca about 5 years ago because of its popularity and unmatched quality.

Il Ghiottone, a pizza and sandwich restaurant located just off Urbino’s main piazza serves La Baciocca crescia for its sandwiches. There are many options, including Squacquerone e Rucola (with cream cheese and arugula) and Crescia col Prosciutto (with dry-cured or cooked ham).

“That it is one of the best cresce they are selling in Urbino,” said Urbino resident Adele Pretelli, 26, who comes to Ghiottone often for a prosciutto crescia sandwich. She said she loves it especially for how crunchy and tasty it is.

When asked if the La Baccioca business will continue in her family, Amadori thinks about her 13-year-old daughter, Mia. “With little regret, I hope not,” she said, “as it is a tiring and demanding job.” But even if the La Baciocca brand loses its family connection sometime in the future, the recipe is accessible to anyone willing to do the hard work. The essence of that crescia created all those years ago by Grandma Irene and her family, and the taste that captivated the poet Pascoli, will still be around for centuries to come. As Baldelli explained, reflecting on the effort and expense, “Quality costs a lot, but it is worth it.”

* For privacy reasons, La Bacoccia asked that the last names of their employees not be included in this article.

Ever since I was little reading and learning about Roman and Greek mythology, I knew that I wanted to go to Italy. And in high school I was fortunate enough to be able to do just that. But when I found out that I had the opportunity to actually live there I knew I had to go. I am in love with Urbino, with its gelato, falafels, chicken and fries, the views by the Raffaello statue, the crescia- shoutout La Baciocca, underground, becoming friends with some of the translators and especially its people who make me smile every day. It is an experience that I will hold on to for the rest of my life. I have learned so much and I am forever thankful to have been given the chance to go here.