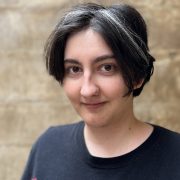 Lida is a student at Rider University.

Brewing specialty craft beer in the woods of Cantiano

CANTIANO, Italy—Everyone knows Italy for its vineyards and internationally-renowned wines. Many Italian dinners the world over are complemented with a good bottle of wine. But, for as well-known as it is, there is also a growing demand for beer in the country. It isn’t even a recent phenomenon: beer has a history on the peninsula dating to the Roman Empire. In modern times, in the Marche region of west-central Italy, several citta della birra (cities of beer) are brewing specialty craft beers for the Italian market. Cantiano is one such town.

Birrificio del Catria, the brewery local to the town, was founded by Pietro Corrieri in 2014. Initially focusing only on the brewery’s property, years of expansion mean that the brewery focuses on more than just beer. Today, one can visit the property for experiences ranging from walking trails that begin on-site to stopping by for food and even staying in an old rustic farmhouse (cheekily referred to as a “B, B, n’ B”). 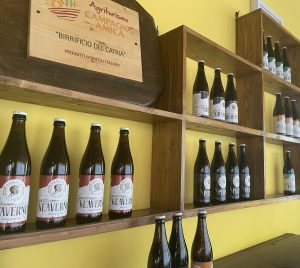 “Agritourism” is the term here, which refers to activities that bring guests to a farm or similar property. It is a phenomenon taking hold in many countries, and Italy is no exception. It seems that Corrieri is well aware of agritourism and his brewery’s current operations reflect that.

The brewery currently produces six types of beer, along with a honey-based mead sold seasonally. Examples of their beers include ”Ukra” (their most popular), “Tekvia” (a pale American ale), and “Klaverina” (a dark Belgian ale).

According to Corrieri, half of the brewery’s barley is grown on-site as required by local regulations. The water needed for the brewing process is stored in two ponds in the property’s Biergarten. Sales of the beer remain restricted to Marche and surrounding regions, though Corrieri has plans to expand his business in the coming years further.

The brewery is tucked away in a mountain valley. On a recent bright and sunny weekend day this summer, the views around the building could not have been more beautiful.  Guests sat at outdoor tables and in the Biergarten downhill from the brewery’s façade. An employee poured beers straight from the tap and handed them to paying customers. Other guests had ordered food. It’s not often that a brewery that also happens to sell fresh, hot food on-site.

The history of Italian brewing dates back thousands of years, all the way to Roman times.

Corrieri was willing to show a visitor the machines and tanks used to make the beer while explaining the process. Most of the brewing equipment was tucked in a basement. Corrieri’s father continued the tour through the stone house next to the brewery. Being inside there was like stepping back in time. It maintains an old-fashioned, rustic atmosphere while also being equipped with modern-day essentials.

Later, Corrieri delved into the business side of things. “And, you know, when you stay here, when you talk with other people,” he said regarding his collaboration with other local farmers. “‘What do you do?’ ‘I make the rye.’ ‘Oh, you know that it’s possible to make rye IPA? I can do [that] for you.’ And they send the rye to make the beers, with their label.” The idea of working with other brewers, lending each other raw ingredients for their beers, is not as far-fetched as one might assume. It ensures that the product remains locally-made and sourced. 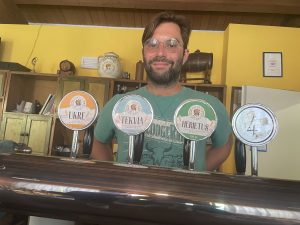 The history of Italian brewing dates back thousands of years, all the way to Roman times. Because barley (a necessary component for beer) could barely grow on the Italian peninsula while grapevines thrived, wine, gained a stronger foothold when the western part of the empire collapsed in the 3rd century AD. The opening of the first few modern breweries in the 19th century sparked what would become a slow comeback for Italian-made beer.

Today, Citta della Birra is a relatively new organization that compiles member breweries for visitors to check out while promoting beer tourism in Italy.

Though wine is an Italian mainstay, might it be time to give Italian beer a chance?

Lida is a student at Rider University.